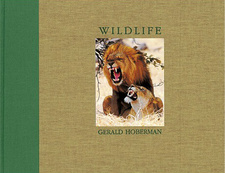 Gerald Hoberman (1943-2013) often encountered situations so extraordinary that, if he had been told about them by someone else, he would have probably dismissed them as tall stories. Quite a few such events took place while he was touring through Africa for his Wildlife book project.

"Our light aircraft bumped along the dusty, makeshift runway in the Botswana bush and coughed to a halt just as the sun dropped below the horizon, painting the wide grassland plains vivid reddish-gold. After weeks of planning, I had arrived at Mashatu Game Reserve and was eagerly awaiting the chance to photograph leopards. I didn't expect it to be easy - these cats are elusive, especially during daytime. My host, zoologist Peter le Roux's research entailed darting the leopards, and fitting them with collars emitting a radio signal. It was hoped that when I accompanied him in the tracker jeep, the bleeps would lead us to a sighting. But as day succeeded day, I grew increasingly frustrated. I had come a long way. Peter was sympathetic, and invited me to accompany him at night instead. I joined him on one of his nocturnal research expeditions. As word got around, a feiv more people asked to be included, and our party left base camp one evening after dinner. Our vehicle lurched along for a while. Then a ghostly pair of tusks suddenly showed up in the headlights. We halted, beans pounding. But the elephant, which had been dangerously close, slowly turned and with the snap of a dead branch, disappeared into the night. We drove on towards a dry river bed. sweeping the trees with a searchlight in the hope of spotting a leopard. In the middle of the river bed the four-by-fours engine spluttered and died, and with it the radio. We were stuck, with little hope of being rescued. It became bitterly cold in the open vehicle. All we could do was sit it out until morning. Our cold discomfort was tempered by elation, however, when we spotted, not two metres away, a leopard burrowed in the soft river sand, presumably for warmth. In the freezing early hours, our endurance was rewarded by another amazing experience. On the other side of the vehicle and close to it, another leopard arrived, dragging the carcass of an impala. Suddenly a hyena challenged the cat for the kill, and a fierce altercation ensued. We sat there, awed by the savage, primeval sounds of these rival predator's. The leopard grabbed the heavy carcass - several times its own weight - in its vice-like jaws and hauled it up the tree. The display of strength was astonishing. We watched as he laid the limp, lifeless impala across a branch, a gaping, bloody void where one eye had been. In the early hour's of the morning Peter was able to coax the radio to life and transmit a crackling message back to base. We were rescued, and thawed out with steaming hot coffee, sandwiches and blankets." [...]

This is an excerpt from the book: Wildlife, by Gerald Hoberman.