South Africa's Winelands of the Cape (Medium-Hoberman), by Gerald Hoberman. 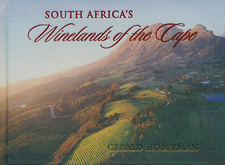 Gerald Hoberman portaits South Africa's winelands of the Cape which wine products, after decades of cultural refining, are appreciated for their excellence by an ever-increasing number of wine lovers around the world.

These world-class wines have benefited enormously from the sheer variety of terroir, the proliferation of new vineyards, and the fusion, influence and investment of winemakers from abroad, on the one hand, and an evergrowing sophistication and personal pride in the individual brands of South African winemakers, on the other. The establishment of black empowerment partnerships in the wine industry has also added 'spice to the gingerbread'. The pursuit of photographic excellence has many similarities to the pursuit of excellence in winemaking. Both are dependent on the seasons and the whims of the weather. In photographing the wide outdoors, the camera's position in relation to the subject and the sun, and its angle of elevation at the time, are vital to the lighting quality playing on the landscape. Some of the challenges of an assignment such as this one include the critical timing of the seasons and the elevation and angle of the terrain relevant to the subject. Other challenges such as rain, high winds, overcast skies, lightning, heat shimmer, dust, haze, mountain fires, the practice of controlled burning on farms, pollution near big cities, excessive contrast, shadows cast by nearby mountains and early-morning mist covering valleys, as well as treacherous, muddy farm roads and vehicle-punishing potholes, steep mountain slopes, precarious cliffs, narrow bridges and aggressive insects near water at dusk, are but some examples of what I had to deal with on this assignment. South Africa's Winelands of the Cape is not an inclusive catalogue of wine farms nor is it a wine guide. Its purpose is to showcase the best attributes of South Africa's winelands of the Cape, highlighting the spirit and the essence of its rich cultural heritage, diversity and scenic splendour. It is hoped that this volume will add an important new dimension to the appreciation and enjoyment of our wines both locally and internationally.

Built in 1968, Bergkelder's famous underground bottle maturation cellar was one of the first of its kind in South Africa. In the 1970s Bergkelder played a leading role in the South African wine industry. Determined to improve the standard of winemaking in the country, it encouraged growers to plant the classic, noble varieties such as Cabernet Sauvignon, Cabernet Franc, Merlot, Chardonnay and Sauvignon Blanc. Bergkelder wines are made in a contemporary style and with a philosophy of minimum interference. The winery has been rewarded with myriad local and international awards including gold medals at the International Wine and Spirit Competition (London) and Intervin (Canada), Grand gold medals at Monde Selection (Belgium), Grand Prix trophies at Vinexpo (Bordeaux), and double gold medals at the Veritas Awards (South Africa).

This is an excerpt from the book: South Africa's Winelands of the Cape (Medium-Hoberman), by Gerald Hoberman.