South Africa’s Winelands of the Cape, by Gerald and Marc Hoberman 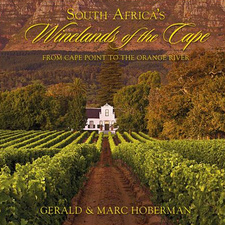 The enormous undertaking of photographing and researching all 20 wine regions of the Cape was an epic journey for Gerald and Marc Hoberman spanning two years and covering vast distances, including arduous 4x4 off-road driving, helicopter flights and mountain climbing. South Africa’s Winelands of the Cape presents over forty wine estates and the country’s rich cultural heritage.

Cape Point Vineyards is unique. It is the only wine estate in this designated wine of origin production area, with the principal estate in Noordhoek open to visitors and wine tasting. 'The joy of the journey is as important as the destination' is how the saying goes and a day trip along the Atlantic Seaboard and M6, a journey of around 33 kilometres, is highly recommended. The route traverses spectacular scenery, taking in Green Point, Sea Point, Bantry Bay, Clifton and Camps Bay (the most expensive real estate in South Africa), before passing through Hout Bay and the final leg to Noordhoek via Chapman's Peak Drive. Camps Bay has a trendy palm tree-lined restaurant strip with bars and boutiques frequented by locals, international jetsetters and celebrities, all against the backdrop of the stunning Twelve Apostles. It is a great place for sundowners and dinner on the way back from a wine tasting at the Noordhoek vineyard. At 593 metres high, Chapman's Peak Drive is one of the most picturesque coastal drives in the world. The sinuous nine-kilometre toll road has 114 bends and numerous viewing points and picnic spots along the way. There are breathtaking 180-degree seascapes with sheer cliff faces dropping hundreds of metres to the Atlantic Ocean, where close to shore sightings of southern right whales and their calves can be experienced from June to November. This is truly a photographer's paradise and attracts international film crews and thousands of visitors each year. At the end of the Chapman's Peak route is Noordhoek, the village renowned for its extensive pristine beach so popular with horse riders. Close by, near the town of Kommetjie, is Slangkop lighthouse. This 33-metre-high edifice is the tallest cast-iron tower along South Africa's shores. Cape Point Vineyards is uniquely situated behind the slops of the Constantia mountains on the Cape Peninsula, a narrow promontory jutting into the Atlantic Ocean. This setting also forms part of the Cape Floral Kingdom, the smallest and richest of six in the world, and its magnificent natural beauty is renowned the world over. The maritime microclimate is perfect for slow ripening of the grapes and the low humidity resists fungal diseases. This, combined with the sandstone on alkaline-rich granite and clay-rich soils and the sunny summers and winter rainfall exceeding 1,000 millimetres, is viticulturally remarkable. The considerable skills and enthusiasm of winemaker Duncan Savage ensures premium award-winning Sauvignon Blanc, Chardonnay and its white blend Isliedh, a Sauvignon Blanc-Semillon.

In Simondium, between Paarl and Franschhoek and not far from Stellenbosch, lies Plaisir de Merle. The estate is set on the rolling east and north-east slopes of the magnificent Simonsberg Mountain, with its soaring, pointed peaks, on land granted to French Huguenot Charles Marais in 1693. Plaisir de Merle literally means 'pleasure of the blackbird', alluding to the sighting of this little bird that heralded the grape harvest in France, but it is also thought that the estate may well have been named after Charles Marais' home town of Le Plessis Marly. His inspired and industrious grandson Jacob developed the estate to be the finest in the region and built a manor house with an elegant gable in 1764.

This is an excerpt from the book: South Africa’s Winelands of the Cape, by Gerald and Marc Hoberman.