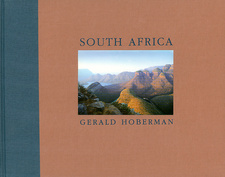 The first edition of South Afrika, in our personal view, has represented the photography art of Gerald Hoberman and the extraordenary craftmanship of the book binder at its best. When this series of photo books came up in the late 1990s it quickly became synonymous for high end quality and an authentic way of looking at the wonders of South Africa, Namibia and other parts of Africa and Europe.

[...] In Fraserburg in the Karoo, over a weekend, on enquiring as to the location of the dinosaur footprints, I soon found myself in the kitchen of the home of the town clerk. He treated me like one of the family and went out of his way to arrange access to the site at short notice. On another occasion, when asking a fellow motorist whether to turn left or right at an intersection on my way out of Grahamstown, I was invited back to his farm for tea. The entire neighbouring community went out of their way to provide me with photographic opportunities beyond my wildest imaginings. The delightfully warm response I received from the people of the Groot Marico, immortalised by the writer Herman Charles Bosman, was memorable; so too were my visits with various guides to Ndebele, Basotho, Xhosa and Zulu villages. Soweto and Boipatong were certainly quite different to what I had expected. Everywhere I went I encountered an open and spontaneous response and I am delighted to be able to share the warm interactions I had there, with you. I refected on all these experiences several times, especially during my journey through rural Transkei, birthplace of President Nelson Mandela, with its pastoral scenes of undulating green hills and spectacular wild coast. To present every aspect of a country and its people in one volume is beyond the scope of any book. I have selected the very best of my photographs of South Africa and I look forward to sharing them with you, for shared is joy doubled.

Egbert van Bart is one of those unforgettable people who make you imagine a spiritual affinity between hippies and the God-fearing trekkers of the previous century. He's neither, of course - things are sometimes not quite what they first appear to be in the Groot Marico - but there's a certain air about him... Egbert owns a curio shop and on occasion works at the Groot Marico Information Centre. He is the local authority on a wide range of topics: he even knows the Latin names of the local fauna and flora. One might call him a student of life.

Brewing mampoer, a potent alcoholic beverage distilled from fruit, is an old tradition in the Groot Marico. Almost any fruit will do in the manufacture of this clear, gut-burning brew. It's first allowed to ferment. The fruit is then tipped into a copper still and 'cooked', forcing steam up a pipe and round a few spirals to emerge as crude alcohol. For the really potent stuff, the product is cooked several times, and the result is a clear hooch which looks innocent but has demon qualities and could 'fuel a motor car'.

There's an old tradition at M&M Mampoer, perpetuated by Tienie Swarts and his wife, Lenie, which would be worthy of a tale in South African author Herman Charles Bosman's Mafeking Road. They buy kersies (cherries) and soak them in their hellfire brew. Then they offer them to unsuspecting, but eager, visitors. The results are spectacular. Expecting something sweet, the victims pop the delicacy in their mouths and bite. But at nearly 100 percent proof alcohol, the mampoer within bites back. Then the locals watch to see whether they spew or swallow. It's a fine test of character, or so they say. [...]

This is ane excerpt from the book: South Africa (Hoberman, first edition), by Gerald Hoberman.