Namibia, by Gerald and Marc Hoberman 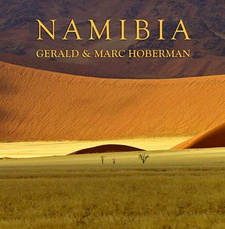 Swakopmund's inimitable style and charm is undoubtedly in its architecture - first seen as a curious mirage of domes, steeples, turrets and towers as one approaches from the interior. Streets are lined with unmistakably German-style colonial architecture, beautifully preserved and on an awe-inspiring scale. Many of the buildings date back to the early 1900s, having been built shortly after the first German settlers arrived. Although one can't help imagining a grand Jugendstil party behind each fagade, today many of these well-maintained masterpieces house shops, offices and more increasingly residential apartments and private homes. Unsurprisingly the Swakopmund property market continues to grow apace each year, as demand increases and suitable  land on this precarious coastline becomes scarcer. Visitors to Swakopmund are invariably charmed by the architecture and the laid-back, yet sophisticated local scene, while potential investors soon become aware of the immense popularity of this small coastal town, especially during the late months of the year when temperatures become unbearable for many in the country's interior. Ludwig Schröder House, a stately structure built in 1913, originally served as the premises of the Südwestafrikanische Boden-Kredit-Gesellschaft, the colony's first credit institution. A tenant of the building, and subsequently its owner from 1949, was Ludwig Schröder, after whom the building is now known. One of early Swakopmund's best known personalities, Ludwig Schröder was a German immigrant who served as Mayor of Swakopmund and vice-chairperson of the Chamber of Commerce. The Schröder family are still very much a presence in Swakopmund, today serving the town as the area's leading estate agent - and undoubtedly the most knowledgeable having been established in 1919! Perhaps the finest architectural example is the magnificent Hohenzollern Building (this page left) - an elegant three-storey building constructed between 1905 and 1906 as a hotel. Designed in the Victorian baroque tradition, the building is adorned with decorative relief. Perched at the top of the corner entrance is a large sculpture of Atlas holding up the world. For fear of it tumbling down, the original stucco figure was replaced with a lighter fibreglass replica in the 1980s.

Situated in the heart of Windhoek's Independence Avenue is the country's leading department store, Wecke & Voigts. Famed equally for its high-quality products as it is for its legendary history, the much-celebrated store has been trading since 1892 and still remains a family-run business, now in its fourth generation. Gustav Voigts was one of the first German settler farmers in the former German colony of the then South West Africa and in 1910 became Windhoek's second Mayor. Gustav and his brothers Albert and Richard, originally from Meerdorf near Braunschweig in northern Germany, arrived on the continent in the late 1800s to take up a job offered by fellow-countryman Fritz Wecke, a merchant in the Boer Republic of Transvaal. From 1892 they began trading goods such as spades, buckets and saucepans with the Herero in exchange for cattle, which they subsequently sold to merchants in South Africa. These first dealings between German merchants and the leaders of the Herero (most notably Chiefs Samuel Maharero and Asser Riarua) were handled with great mutual respect and during the 1904 Herero uprising the Wecke & Voigts trading store was spared due to their longstanding relationship with the Herero people. Through sheer determination, respectful business principles and innovation (in 1972 they had the first air-conditioned store in the country), Wecke & Voigts grew to become one of Namibia's most respected businesses and the brothers' stories became the stuff of legend. Today Wecke & Voigts stock fragrances, clothing, souvenirs, gifts, bathroom, kitchen and household accessories, and have a hugely popular in-house coffee shop at their flagship Independence Avenue store. The business has expanded to include the popular Hochland Spar and Maerua Superspar, as well as the prominent Wecke & Voigts National Wholesale, and after over 120 years of trading in Namibia, their proud slogan still reads '100% Namibian since 1892'. [...]

This is an excerpt from the book: Namibia, by Gerald and Marc Hoberman.