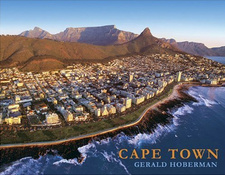 A dense row of pine trees easts long shadows over gently sloping hills where a lone homestead basks in the late afternoon sun. Embraced by mountains and covered with vineyards. Franschhoek (meaning French corner) is one of the Cape's most spectacular valleys. The district was settled in 1688 by French Protestant refugees who had fled religious persecution in Europe, bringing with them expertise in agriculture and wine-making, the French Huguenots laid the foundation for a 300-year-old tradition of viticultural excellence in this corner of the Drakenstein valley. Then the British look control of the Cape in 1806. Franschhoek was producing two-thirds of the colony's wine, leading the British to mistakenly credit the Huguenots with the introduction of vines at the Cape. The nine original farms granted to the Huguenot settlers are still associated with wine-making, and some of these continue to reap top honours for their wines.

Dusk settles on the rolling hills and towering peaks of the Nimonsberg mountain. A winding road meanders rough forests and vineyards to reach the wine route estates situated along the precipitous Helshoogte Pass. The first wine route to showcase and sell estate wines was begun in 1971, in Stellenbosch. Since then, wine routes have sprung up in most wine-growing districts in the Cape, allowing aficionados to visit farms as far afield as the west coast and Worcester. A winelands tout-can be combined with lunch at one of the excellent farm restaurants, a cellar tour, or a visit to some ol the beautiful old Cape Dutch farmsteads.

Neath planted rows of vines grace the contours of the Stellenbosch hillside. A 40-minute drive from Cape Town. Stellenbosch, the second-oldest proclaimed (own in South Africa, boasts a variety of red and white wines from award-winning wine estates and co-operative wine cellars. Situated in the valley of the Eerste River (literally first river), the town was established in 1679 by Simon van tier Stel. who granted farms and vine stocks to free burghers and colonists from Holland. France and Germany. Wine-growing took off when the first harvests proved that the district's fertile soils and diverse climates were ideal lor the cultivation of vineyards.

Teeing off at the Arabella golf course is a stupendously beautiful affair. The 18-hole championship golf course, just over an hour's drive from Cape Town towards Hermanns, lies at the foothills of the Kogelberg Mountains and borders the Hot River lagoon, the largest natural lagoon in southern Africa. The course with its impressive bent grass greens, wide fairways and picture-postcard views from every hole was designed by Peter Matkovich. A prime golfing holiday destination, Cape Town and its surrounds offer lovers ol the sport an array ol quality facilities, including Erinvale, designed by the famous Gary Player, and Spier, the only golf club in the world with a 19th hole in a wine cellar. [...]

This is an excerpt from the book: Cape Town (Maxi-Hoberman), by Gerald Hoberman.