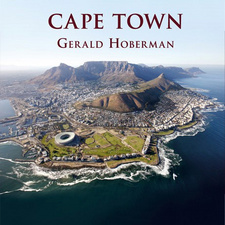 Photographer, author and publisher Gerald Hoberman (1943-2013) considered himself most fortunate to have been born and raised in the 'Mother City', a host of the World Cup 2010. Although he had travelled widely, he have lived here for most of his life, yet each time he returned he felt a twinge of nostalgia when he saw Table Mountain again. For him it had been a great pleasure to produce this beautiful photo book and, through the medium of photography, present to you the quintessence of Cape Town as he saw it.

The red-and-white candy stripes of the Green Point lighthouse (left) are as familiar as the haunting sound of its foghorn on a mist-shrouded night. The oldest working lighthouse on the South African coast, it was built in 1824 by Merman Schutte, a German builder who came to the Cape in 1789. The original lighthouse contained two fixed lanterns which burnt 9 litres of sperm oil every night, producing a light visible up to 2f kilometres out to sea. In 1865 revolving glass lenses were installed to make a single flashing light. The lighthouse was electrified in 1929. The Dassen Island lighthouse stands resolute and tall on ragged rocks in the Atlantic Ocean. With red and white horizontal livery resplendent and welcoming against an azure African sky by day, it broadcasts its light at night across the dark and dangerous high seas. Gigantic swells crash into the nearby rocks, erupting in dramatic fountains of powder-blue, grey and white, which sparkle in the sunshine as several tons of seawater cascade and crash back into the undulating ocean rollers, in a perpetual oceanic cycle. This treacherous Cape of Storms, littered with rusting wrecks and the ghosts of the drowned, is characterised by unpredictable winds, swirling coastal currents and dense fogs, which demand the presence of the lighthouse and its aids to navigation.

A delightful collection of 18 sculptures by local artist Marieke Prinsloo-Rowe temporarily graced the Sea Point promenade as part of a public art initiative. The little girl in the fable-like interpretation represents a young South African democracy and the dragonfly visualises the dream of freedom, equality and hope that South Africa as a nation pursues.

This botanical wonderland is inspirational, educational, entertaining, pristine, safe, wheelchair- and pram-friendly and entry is free. Built for the World Cup in 2010 and set in 12,5 hectares near the Cape Town Stadium, the park has commanding views of Signal Hill and Table Mountain. The historic Green Point lighthouse, the Sea Point promenade, the .Atlantic Ocean and Robben Island can all be seen from here, adding to its unique ambience-. The park has some 320 local plant species planted by vegetation type, such as coastal thicket, mountain fynbos, sandvlei and renosterveld. There are delightful coloured glass-beaded dragonflies, chameleons, sugarbirds and sunbirds to name a few of the creative works that sparkle among the sun-drenched flowers. Larger indigenous animals such as the caracal are cleverly cut out of rusted sheet metal. Expansive water features attract many birds and one pond has several colourful, stylised fish leaping out of the water. There are many picnic spots and shady tables and benches, drinking fountains, outdoors exercise machines, a wooden children's playground, copious lawns, a fascinating interactive sundial and a small amphitheatre. A Khoikhoi (early indigenous inhabitants of Cape Town I display of huts, customs and everyday life is thought provokingly juxtaposed against the Sea Point skyline.

Every summer, hundreds of sun lovers flock to Clifton, Cape Town's most glamorous quartet of beaches. The beaches are divided by huge granite boulders to form separate coves. According to local custom, the largest of the beaches. Fourth beach, is favoured by families, while First, Second and Third are frequented by teenagers, students and twenty- to thirty-somethings. Clifton is a haven on clays when the Southeaster blows. Along the rim of Clifton lies some of the city's most coveted real estate. [...]

This is an excerpt from the book: Cape Town (Hoberman), by Gerald Hoberman.