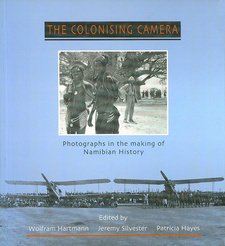 'The Colonising Camera' is groundbreaking and unique in several respects. First of all, it focuses on the history of visual representation in what is now the country of Namibia, examining the use and role of photography in the precolonial days, then during the German colonial period, the British-South African occupation and the era of independence and decolonisation.

The fact that there is public access to photographs of Namibia's past, and that many of them can be published in this book, is due to the dedicated work of archivists. The late Director of the National Archives of Namibia recognised the importance of the visual, and she opened wide the doors of the archives to the curators and editors of this project. We owe Brigitte Lau and her colleagues Everon Kloppers, Nico Kisting, Renate Morgenstern and Jochen Kutzner, an enormous debt. A substantial part of the exhibition The Colonising Camera is derived from the Hahn Collection, which was generously made available by Rodney Hahn through the National Archives and the Basler Afrika Bibliographien. At the latter institution we would like to thank Carlo Schlettwein and Dag Henrichsen for their unhesitating support. Barbara Faulenbach at the Vereinte Evangelische Mission in Wuppertal facilitated photographic research and reproductions; Lindsay Hooper, Chris Avery, Patricia Davison and Rina Krynauw at the South African Museum made the Dickman Collection available (even in unconventional circumstances); Margie Struthers at the University of Cape Town African Studies Library assisted with published photographs; Helen Domleo at the MuseuMAfrikA in Johannesburg provided help with the Fourie Collection. We thank all institutions for giving their formal permission to reproduce photographs, and the John Muafangejo Trust for allowing us to reproduce the artist's linocuts. We are very grateful to the following photographers from Okombahe for allowing their work to be reproduced in this publication: Albert Nuwuseb, Christine Maletsky, Willemina Hoeses, Willem Hoeseb, Lucia /Goagases, Christolene Goses, Maria Pietersen Abubakar, Christian Uiseb and Linda Axakhoes. Thanks to Rick Rohde for facilitating the inclusion of this work. We also acknowledge the generous co-operation of Johanna Mweshida and Erastus Amupolo who gave permission to quote extracts from their historical research. Numerous people have helped with the logistics of The Colonising Camera exhibition during its travels. In Namibia we benefited from Nico Kisting's exceptional curation, and we also thank Jacqui Pickering, Ciraj Rassool, Goodman Gwasira, Prudence Egumbo, Lazarus Paulse, Franz Irlich, Jean-Yves Rigal and the Franco-Namibian Cultural Centre, Beatrice Sandelowsky and the many audiences. In South Africa we are grateful to Andrew Steyn, Cheryl Minkley, Brenda Cooper, Duncan Miller and Gary Baines. For their unique opening of the Cape Town exhibition, we are indebted to David Haufiku, Skinny Hilundwa and Natangwe Shapange. In the United States, Paul Landau generously undertook the organisation of the exhibition at Yale. We are also indebted to Marcia Wright and Ann Biersteker for their involvement. Additional research for the book in Namibia was assisted by Aggie Mbidzo, Barney Kaaruombe, Tuwilika Shilongo, Casper Erichsen, Innocent Mweti and Guilty Likando. We are grateful to Lorna Richardson for her help in London. For their assistance during the research trip to northern Namibia in 1996, warm thanks go to Jeremiah Kahungua, Evaristo Amweero, Nangula Amoonga, Natangwe Shapange, Peter Katangalo, Ambrosius Amutenya, Nancy and Ian Robson and Marilyn Bedwell at Odibo, and the photograph studios at Ohangwena and Oshakati. We would like to thank Gwen Lister and Graham Hopwood, the editors of The Namibian newspaper and its weekly supplement, for carrying our fortnightly history page 'Picturing the Past', and all those readers who have responded to it by phone or in writing. Constructive and stimulating feedback on earlier drafts of this book, especially its introduction, have come from Leslie Witz, Gary Minkley, Paul Landau, Rick Rohde. We acknowledge the intellectual generosity of our editorial consultants David Bunn and Ciraj Rassool, and thank our readers Marcia Wright and Christraud Geary. Many other colleagues have helped with ideas, sources and references, especially Dag Henrichsen, Meredith McKittrick and Robert Gordon. We have benefited from discussions with Deb Amory, Pippa Skotnes, Ann Stoler, Carolyn Hamilton, Marijke du Toit and Ann Wanliss. Special thanks to colleagues and students working on public history at the University of the Western Cape. Also in the Cape, we are grateful to Jessie Hahn and the Hahn family, Sue Newton-King and Vivian Cohen for their practical support. Rose Meny-Gibert and the University of Cape Town Press have guided this book towards publication. Co-publication in Namibia has been facilitated by Peter Reiner and Pierre du Plessis. Shauna Westcott has been a most invigorating copy editor. But most of all this book could not have happened without Jos Thorne. Her calm receptiveness and creative skill in the design and layout of the manuscript over a period of two years have been an education and a challenge to the editors. Finally, it is not easy to publish a history book with such a large photographic component. That we have been able to do so is due to the generosity and vision of the Carl Schlettwein Foundation in Switzerland. We have been equally fortunate in receiving significant financial support from the Research and Publications Committee of the University of Namibia. While it is donors and institutions who have made this publication possible, we wish to remind readers that the views expressed about the photographs are entirely those of the editors and contributors.

This is an excerpt from the book: The Colonising Camera, by Wolfram Hartmann, Jeremy Silvester and Patricia Hayes.

The remarkable photographs in Bush of Ghosts taken from 1986-90, show the Border War between the South African Defence Force and SWAPO.

My heart tells me that I have done nothing wrong. The fall of Mandume

My heart tells me is the story of chief Mandume and his fall under the grip of the colonial powers.