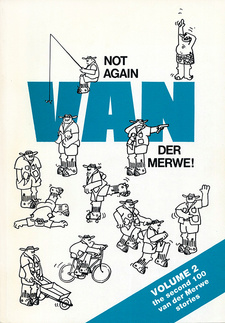 In today's intense debate the quiet chuckle, the acceptance of our common destiny as reflected in common humour, is sunk a refreshing tonic. The word "detente" means "release of tension" and while Van der Merwe is often racialist, his open style can ease tension and bring a smile to people of all races. Back in 1976, Tony Koenderman, Jan Langen and André Viljoen had collected another 100 jokes on Koos van der Merwe. This second volume was named "Not again Van der Merwe".

After years of living in Zambia, Van der Merwe paid a visit to Pretoria, where he bumped into his old schoolfriend, Nico Diederichs, who had risen to the position of President. "What are you doing now. Van?" asked Dr Diederichs. "Oh, I am working on the railways," said Van. "I thought you'd make more progress in life than that," said Dr Diederichs. "And what about you?" Van asked. "Oh, I'm President of South Africa now." "Hell," responded Van. "You haven't done much with your life either. Where I come from we have a Black man doing that job."

Said Mrs van der Merwe to her husband: "I think we should give little Jannie an encyclopedia for school." "No," said Van. "He can walk to school like I did."

Van der Merwe died but after two days he miraculously returned to life. At once, he was in demand all over the world. First he was summoned for an audience with the Pope. "Did you go to heaven, my son?" the Pope asked.
"Yes," said Van.
"And did you see God?"
"No."
There was an intake of breath. "Well, you mustn't ever tell anybody that. Here's a thousand dollars, and when people ask you, tell them you saw God."
Next there was an interview with the Soviet leader Leonid Brezhnev.
"Did you go to heaven?"
"Yes."
"And did you see God?"
"Yes," said Van.
"For God's sake," said Brezhnev. "Don't ever mention that. Here's two thousand roubles, and if people ask you, tell them there is no God in heaven."
Finally, on returning to South Africa, Van went to see the Prime Minister.
The same questions came.
"Did vou go to heaven, Van?"
"Yes."
"Did you see God?"
"Yes," said Van, holding out his hand expectantly, "and he is Black."

Van  der  Merwe  was  very  proud  of the  modern plumbing on the farm; he had an outside toilet perched on the edge of a cliff, which saved him from digging a pit. One day he called his son, Koos. "Koos," he said sternly. "Did you push the toilet over the cliff?"
"Nee, pa," replied Koos.
"Now listen carefully,'" said Van. "I'm going to tell you a story about an American President called George Washington. When he was a boy, he cut down his father's favourite cherry-tree. And when his father asked him if he did it, he said, 'I cannot tell a lie. Yes, I chopped clown the cherry tree."
"And because he was so honest, his father didn't punish him. And look where he ended up - President of the United States."
"Now remember that story, and I want to ask you again: Did you push down the toilet?"
After some hesitation, Koos replied, "Yes, I did."
Immediately, Van whopped his son with all his might across the side of the head, sending him flying. Koos scrambled to his feet angrily.
"But, Pa, you told me George Washington never got punished because he told the truth."
Roared Van: "Ja, well George Washington's father wasn't sitting in the cherry tree at the time."

This is an excerpt from the joke book: Not again Van der Merwe: Volume 2, by Tony Koenderman, Jan Langen and André Viljoen.

This is the second volume of the van der Merwe joke collections with another 100 good laughs.

This is the first volume of a very popular series of South African van der Merwe joke collections and consists of 100 jokes and stories.