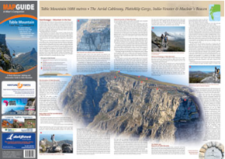 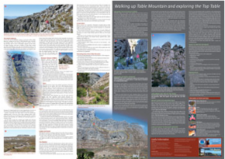 Climber and designer Tony Lourens is the publisher of the Map Guide series, here introducing the area of Table Mountain nearby Cape Town, South Africa.

[...] Table Mountain has a mood for every occasion. Hardly will she wear the same cloak from one instant to another. On a clear summer's day she stands proudly etched against a deep azure sky, her grey craggy edges in crisp, stark relief to her surroundings, almost looming over the city with a visceral presence that exudes a palpable energy that is impossible to ignore. But catch heron a day when the elements are charged, and you will see a very different side. A side that brings a deep brooding menacing facade, as the thick grey clouds drag viscously across her ominous, precipitous walls with the rain setting the many ravines, gullies and gorges alive with countless silvery ribbons of waterfalls which cascade in glorious fashion down her vertiginous ramparts to create a myriad of gurgling brooks and rivers. Having lived in her shadow for over 50 years, there is never a time that I don't look up at her majestic rocky walls and breathtaking skylines without a feeling of wonderment, appreciation, respect and a deep yearning to be up there high among her inviting yet foreboding crags, feeling the breeze against my cheek and the stone beneath my fingers reveling in the beauty of a mountain that has no equal. The south-western Cape is the smallest and richest of the floral kingdoms on our planet, with over 8000 flowering species, of which about 2500 can be found on the Cape Peninsula, and approximately 1400 on Table Mountain. The mountain is home to a great variety of indigenous and endemic plants. In the Spring the fynbos (the Afrikaans word meaning 'fine bush') is particularly attractive with many species of Protea, Erica and Restias to be seen. Unfortunately, Table Mountain has, over the years become fraught with alien vegetation which greatly threatens our indigenous flora. A number of species were introduced into the Cape approximately 150 years ago for various reasons and these hardy, fast-growing weeds quickly took firm hold in our soil, and the * destruction of the indigenous species began. The fight to eradicate these aliens has been an ongoing affair for decades, but unfortunately there is no short-term solution and it is likely that centuries will pass before the war is won. There is not a great variety of animals to be seen on Table Mountain, and you could spend an entire day out and see only a few lazy lizards basking in the sun. The most common animal on the mountain is the dassie (rock hyrax), which can be spotted scuttling around in most areas, particularly in the vicinity of the upper cableway station. A variety of sunbirds, with their glittering metallic colours, can usually be found hovering around most nectar-producing flowers, although some of them also feed on insects. Redwinged starlings and rock pigeons are commonplace, as are the remarkable swifts who have an incredible command of aerobatics. Raptors to watch out for are the rock kestrel, the peregrine falcon and the undisputed king of the skies, the Cape black eagle. This huge, regal bird is normally seen with its partner, soaring effortlessly, high above the crags, continually scanning the rocky ravines and outcrops for some unsuspecting rodent to whisk off to its eyrie for a spot of lunch. [...]

This is an excerpt from the Map Guide Table Mountain in Cape Town, South Africa, by Tony Lourens.