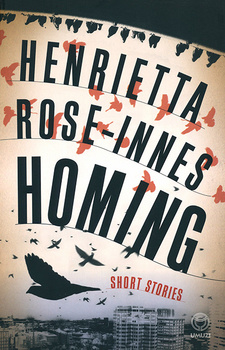 Homing is admirably consistent in quality, with hardly a story dipping below the standard set by the opening few. Henrietta Rose-Innes draws her miscellany of characters convincingly and with just the right balance between compassion and detachment.

Before, it had always been a good road. Never big or busy, but alive, with an open feel despite the cul-de-sac. Ray and Nona's house took up one side, and opposite them was a sports field, ringed by shaggy eucalyptus trees. Unusual, fortunate, to have so much green space in the middle of town. People came past all the time: dog walkers, soccer players, domestic workers taking the short cut down to the taxi rank. Somewhere among the houses on the far side of the field, a man kept homing pigeons. In the evenings you could hear his looping whistle and see the flock turning, specks against the blue of Table Mountain. Nona and Ray always listened for the birdman's call. At the end of the road was the face-brick retirement home. "Look at the oldies," Ray said, watching through their kitchen window as a posse of ancient women - and one man - ventured out from the home. It was a short walk down to the shops on the main road. "Don't laugh. That's us, all too soon," said Nona. "Doesn't bother me," said Ray. "Potter down to the shops, read the newspaper, have a cup of tea. Looks all right." This was pretty much their schedule anyway. Nona was in her early sixties, Ray five years older. She'd done secretarial work, and he'd been a health and safety inspector, but that was all in the past now. Although they were both in good health, it was easy to imagine the years ahead, living where they did. One day, she and Ray would pack a small overnight bag, close the door behind them and simply walk up the road, into old age. And he was right: it wouldn't be so bad. They'd stroll around the field in the evenings, arm in arm. She wasn't ready for it yet, but she was also not afraid. And so it was upsetting when the old-age home closed down. Ray and Nona read the news in the paper, but by then it was a done deal. Overnight, all the residents were bussed out to bigger institutions in the bleak northern suburbs, far from the old part of town. The place stood vacant for barely a week before the workmen arrived, throwing up hoardings across the facade and also, shockingly, around the perimeter of the field. A high wall rose at amazing speed and was painted a peachy pink, and behind it there reared the pink backside of a new hotel. The noise of construction, which went on for months, was unbearable, but the greatest affront was the size and fleshy colour of the thing. Set down like a giant monopoly piece, fatly overflowing its monopoly square, the hotel filled up the space where the old-age home had been, and then turned the corner in an l and filled the space directly opposite Ray and Nona's kitchen window, too. Brash, three storeys tall, and featureless except for a row of mirrored windows that faced them over the top of the new wall. "Are they even allowed to do that?" asked Ray. "They already did," said Nona. And at a stroke, the road was mortally wounded. Where they lived was now a dying blood vessel, cut off from circulation. Nobody rode a bicycle past Nona's kitchen window any more, nobody walked a dog. The birdman fell silent: the sky in which his flock had stirred had turned into pink-painted plaster. It was as if the tyres of the cars and the soles of all those feet had not worn down the street, but had in fact been what sustained it. As the weeks wore on, the tar cracked and developed sunken patches. [...]

This is an excerpt from the collection of short stories: Homing, by Henrietta Rose-Innes.

Homing is an anthology of thrilling short stories, set in Cape Town, the author's home town.

An out-of-control swarm of insects hampers the completion of Nineveh, a luxury estate outside Cape Town.

Interlude in Switzerland: The Story of the South African Refugee-soldiers in the Alps During the Second World War.

Stories of Contact: For this unique and impressive anthology, some of South Africa’s top storytellers were invited to interpret the theme of touch.