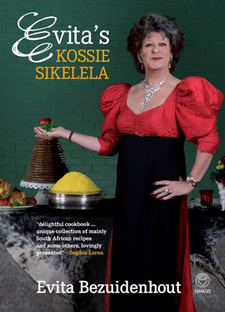 Evita's Kossie Sikelela cookbook includes recipes for diabetics and vegetarians, Halaal and Kosher dishes, and even recipes to keep you in such lovely shape as she, Evita Bezuidenhout, is.

Evita's Kossie Sikelela cookbook includes great recipes, humor and political satire by Evita Bezuidenhout the alter ego of Pieter-Dirk Uys. In South Africa, she is famous white woman and often finds herself in the company of the powerful and famous. She rememberes: When I was a little girl at school in Bethlehem in the Orange Free State, I remember how traumatised I was by that picture of the Battle of Blood River that hung on the wall next to my table (I was in Standard Four for 2 years because I'd broken my leg and a snake bit me - twice). Those images of violence and bloodletting were enough to drive me, as a young Christian Afrikaans girl, quite insane. I voted for the NP! No wonder so many of us Afrikaners are so deeply disturbed. And then I was introduced to melktert. It was soft on my pain, candy floss against my fears. Melktert is more than milk and less of a tart. It is that kiss of life from one who knows life to one who needs love. Melktert is the cushion after the traumatic fall from Hell, the duvet of warmth after the avalanche of guilt has frozen your soul. Melktert is the ultimate weapon of sweet destruction. Hand a piece of melktert to the person who confronts you with a gun. You will end up with that gun, leaving the antagonist with another few kilos on his hips.

Roll out puff pastry and use it to line a greased pie dish. Bake blind for 10 minutes at 180°C. Heat two-thirds of the milk and butter over low heat to just below boiling point. Set aside. Beat the sugar, cornflour, egg yolks, the rest of the milk and the vanilla essence and add this mixture to the hot milk. Beat the egg whites until stiff. Beat the custard mixture and add to the hot milk. Fold in egg whites carefully. Pour the mixture into the pastry case, sprinkle with ground cinnamon and bake at 180 °C for 30 minutes or until the filling has set.

This is an excerpt from the cookbook: Evita's Kossie Sikelela, by Evita Bezuidenhout.

Chorus and Cuisine South Africa: A Kitchen Safari with Traditional Recipes and Music plus Audio-CD

Cook with Ina Paarman changes cooking to a rewarding pastime with over 200 South African recipes.

For cooking outdoors, whether under the stars in the bush, or just in your own backyard, Bush Cooking will be your constant companion.