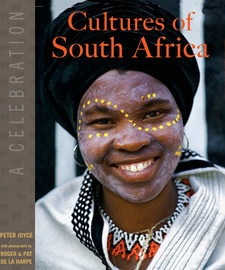 The features and faces of South Africa’s indigenous cultures are as varied as the continent’s many textures and colours. Peter Joyce and Roger de la Harpe will make you familiar with them.

There is an inherent risk in writing about the languages and group identities of the many and various peoples of South Africa. The lines are blurred, sometimes imperceptible. Over the centuries, migration, merger and change have been the main historical constants on the human landscape; all is mix, nothing is absolutely clearcut. The territorial coverage of this book is, therefore, inevitably arbitrary, chosen for practicality and clarity, roughly centred on but by no means restricted to artificial borders dictated by society and history and, most significantly, colonialism. Language and culture have no boundaries; elements of both are to be found and, indeed, are the principal cultural markers in lands well beyond what were formally designated the collective domiciles. The Swazi people - or, more correctly, the amaSwati - have their own, fully independent country, though a great many live in South Africa and SiSwati is one of that country's official languages. Lesotho and Botswana have similar status, so they too feature prominently in these pages. The overall emphasis, however, is on those language groups resident in South Africa. Up to a point, the 'homeland' divisions of the apartheid government were valid enough, since the designated groups did indeed occupy these (and other, much bigger) areas. But they all came from elsewhere; some of them, in fact, quite recently. Many are the products of the fission and fusion of the past, with some peoples breaking away from the main body to form independent societies and to build their own canons of tradition, custom and law; others being absorbed, often voluntarily but sometimes involuntarily, into bigger or more powerful communities. There are a myriad exceptions to the general rule, of course. There are distinctive subgroups within individual groups, and some of these subgroups even have components that are culturally separate. The canvas is huge, complex, infinitely nuanced, so the big picture is painted with very broad strokes, generalised and even oversimplified. South Africa has eleven official languages. Two of them - English and Afrikaans - are considered imports and are widely used as second languages. About 8.2 per cent of the population speaks English, and 13.3 per cent Afrikaans. However, if you go back far enough all the country's supposedly indigenous languages are, in fact, exotic. Around four out of ten people speak either isiZulu or isiXhosa in the home, and English is widely used in the education system and in business. Of the indigenous tongues, those of the so-called San (Bushman) hunter-gatherers and the seminomadic Khoekhoen only traces remain - or rather, barely sustainable linguistic pockets survive, against the odds, mostly on the great sandy plains of the northwest, in Namaqualand and Namibia. There are in fact just two African language systems in the region - Sotho and Nguni. Nearly all the other languages are dialects of one or the other; all are classed as 'Bantu', and even that is semantically incorrect. 'Bantu' refers to the people themselves, the Ntu-speaking people. Questionable, too, is the name 'San', though not incorrect so much as of dubious origin: it seems that, among some early Khoekhoen peoples, the word meant 'outsider' and carried other, related and more insulting overtones. In Cultures of South Africa: A Celebration we have opted to use the conventional English-language adoptions of traditional group names that are more familiar among an English-speaking readership: the Xhosa, Zulu, Southern Sotho, Tsonga, Northern Sotho, Swazi, Ndebele, Venda and Tswana. [...]

This is an excerpt from the book: Cultures of South Africa, by Peter Joyce and Roger de la Harpe.