The rise of the Phoenix. The story of Sport in the new South Africa, by Peter Joyce 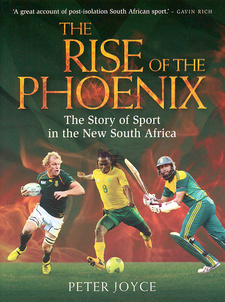 Factual yet entertaining, historically accurate yet anecdotal, Peter Joyce's book, The rise of the Phoenix: The story of Sport in the new South Africa, is a entertaining book on the younger sport history of our nation.

The Boys Come Through: Soccer's debut

It would be wrong to discuss the recent soccer scene without remembering the pioneers, those who grew up and played in the darkness of the fifties and sixties. There were some truly talented players: two made a special impact, but overseas, not locally. All old-timers were asked to name South Africa's best ever footballer, most would probably vote for Steve 'Kalamazoo' Mokone. Others in Europe agreed, among them the Italian sports writer Beppe Branco, who said at the time that 'If Pele of Brazil is the Rolls-Royce oi soccer players, Stanley Matthews of England the Mercedes-Benz and Alfredo Stefano of Argentina and Spain the Cadillac, then Kala [Kalamazoo] of South Africa, live and lean, is surely the Maserati.' Kala was born in Doornfontein and grew up in what was then Sophiatown, a 'mixed' suburb of Johannesburg that, before it was demolished by the apartheid regime, housed talent of all kinds. Kala's particular gift, apart from a good academic brain, was for football, and especially for scoring goals, although his dad didn't agree and pushed him to study law. It was a valid but vain fatherly effort; the boy was already something of a national star (with the Bucks) at the age of 16, and the foreign scouts were homing in on the teenage striker. That was in the 1950s, and finally the English club Coventry got him under contract, 'finally', because the South African government wasn't keen on handing out passports to black people. Kala was then aged 17, and an instant sensation, one writer reporting that 'I haven't seen such clamour in Coventry since the end of World War Two' (the citv had suffered terrible bombing raids). It was the start of a glittering football career that took Kala to Holland. France. Italy and. towards its end, to Australia and Canada. It seemed he would become a legend in all these places, but especially in the Netherlands, where he scored two goals on debut for his new club Heracles, helped take them to the top of the league and had a street named after him (a book and a film were also produced). Barcelona took him on, then lent him to the French club Marseilles, and in due course he moved to Turin, Italy. In his first appearance he scored all five goals in Torino FO's 5-2 victory over Verona, and in a kind of repeat performance netted three times when the Italians visited Kiev, to become the first foreigner to record a hat-trick against the Soviet Russian giants. Kala's travels filially ended, controversially, in the United States. He had entered the respected Rutgers University in 1964 to become a doctor and then assistant professor of psychology, but one day the police burst into his office to arrest him on charges of assaulting his wife and her divorce lawyer. He served nine long years in an American jail, pleading his innocence throughout. That blemish, it seems, hasn't tainted his legacy. In 2005, South Africa's president, Thabo Mbeki, awarded him the Order of Ikliamanga in Gold, the country's top honour for contributions in the fields of arts and sports. The match was probably the most important in South African football history, symbolically important, that is. The pity of it was that not many people actually saw it. The broadcast media were on strike. [...]

This is an excerpt from the book: The rise of the Phoenix. The story of Sport in the new South Africa, by Peter Joyce.