The Merit Medal for Combatants in German South West Africa 1892-1918, by Gordon McGregor 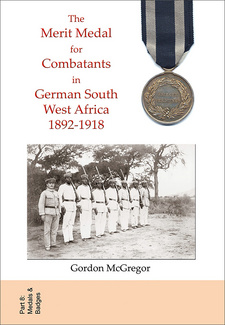 The author of The Merit Medal for Combatants in German South West Africa 1892-1918, Gordon McGregor, is a Namibian citizen and an experienced expert author on military history and medals of Namibia.

[...] The colonial troops were in effect the army of the German colonies and their primary role in times of war would be to defend the colonies. Also of interest is that the colonial troops did not fall under the control of the Ministry of War in Germany but under the control of the Ministry of Foreign Affairs and later under the Ministry of Colonial Affairs. Regarding the translation of the medal's name from German into English I chose what I believe is the correct translation in keeping with the gist of what the name actually meant and for what it was awarded. This book deals only with the Merit Medal for Combatants and is based on information gained from original files at the National Archives of Namibia as well as various editions of the German Colonial Gazettes (Deutsche Kolonialblatt). These references detailed the official awarding of medals in the various German colonies and this included the awarding of medals to the local population who were a part of the military force within the colonies. The files at the National Archives of Namibia also contained name lists of the persons awarded with medals but I am sure that these lists are incomplete and that many more persons where awarded the medal. To get these lists completed I am appealing to those who have information on any person not listed in this book to contact me and, perhaps, one day the lists will be fully completed. This book deals with the awarding of the Merit Medal for Combatants in German South West Africa ONLY and does not deal with the awarding of the medal in any of the other former German colonies. It is also not a history of the various campaigns within the colony as there have been many books written on the subject that can be consulted. This book is not a work on the history of or the politics of their service in the former colony but deals rather specifically with the medal awarded to these members of the Native population as from 1898 to 1918 when the country ceased to be a German colony. What also proved to be very elusive are photographs of the recipients and even more elusive are photographs of them wearing their medals. What I found very interesting and which came out clearly in my research was that both Kaptein Hendrik Witbooi and his Onder-Kaptein Samuel Izaak, were awarded with the medal in Gold not on one but two occasions! The first occasion was for their leadership of the Witbooi unit that assisted with the suppression of the Khauas uprising in 1896 in the Gobabis area of the colony. The second occasion was for Kaptein Hendrik Witbooi's participation as the leader of the Witbooi unit assisting the colonial troops with the suppression of the Herero uprising in 1904. Further, there was also a surprise when the name of Kaptein Witbooi's second-in-command, Onder-Kaptein Samuel Izaak, came up as a person also awarded with Gold medal again for his assistance in the suppression of the Herero uprising. Although not in the scope of this publication, I have included an appendix on the Colonial Commemorative Medal. I am sure that this section will assist readers with a bit of background on the other medal that could be awarded to the Native population in the German colonies. I wish to sincerely thank Mr H. Koch for his personal input for setting pen to paper and completing the chapter on the campaigns that the local population were involved in. This chapter is a job well done and proves to be a valuable insight on these campaigns and the involvement of the local Native population in these campaigns. The chapter also consolidates all the various pieces of information available into a single work and proves very informative. In addition, I would like to thank the following for all their assistance in the production of this publication, the National Archives of Namibia, the National Library of Namibia, and the Library of the Namibia Scientific Society. Lastly, I wish to express my sincere thanks to the Deutscher Kulturrat for their financial support that made the printing of this book possible.

This is an excerpt from The Merit Medal for Combatants in German South West Africa 1892-1918, by Gordon McGregor.

The Merit Medal for Combatants in German South West Africa 1892-1918 was awarded to members of the native population.

The wheel tax metal badge came into existence as a result of Ordinance No. 6 of 1926 of the South West Africa Administration. The last badge was issued in 1961.

Gondwana History: Memorable Moments from Namibia's Past, 6th edition, is a collection of 30 tales of Namibian history, culture and nature.

Gondwana History: Memorable Moments from Namibia's Past, 3rd edition, is a collection of 30 tales of Namibian history, culture and nature.

A chronological documentation of reports, newspaper clippings and photos/illustrations related to the Equestrian Monument (Reiterdenkmal) 1912-2014.

Murder at Angra Pequeña is the true story of an incident that happened in 1863 in South West Africa.

The Prisoner of War Tokens of German South West Africa

The Prisoner of War Tokens of German South West Africa: A description and a historical view.