The Best of Cape Town (Globetrotter), by Peter Joyce 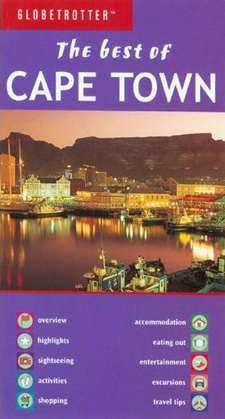 What to Eat Cape Town’s myriad restaurants offer the full range of food styles - from the classic to the exotic. Some areas with especially heavy concentrations of eateries are the new big mall and leisure developments located in the northern areas, as well as the V & A Waterfront, and the southern suburban stretch from Rondebosch through to Claremont. The local line-fish, crayfish (rock lobster) and perlemoen (abalone) are usually excellent, though the shellfish tends to be expensive. Antelope venison (including springbok pie) is something of a speciality, and ostrich steaks are becoming an increasingly popular menu item. Traditional Cape country fare, available in selected restaurants, evolved among the rural Afrikaner communities. Common ingredients of the meal include tender Karoo lamb, sweet potatoes, cinnamon-flavoured pumpkin, sweetcorn fritters, and, for dessert, milk tart, koeksisters and a selection of sticky preserves which are known as konfyt. Rather tastier and less stodgy is Malay cuisine, introduced by the early slaves from Indonesia and famed for its aromatic boboties. (Curried meatloaf topped with savoury custard), bredies (fragrant stews, usually of mutton, with potatoes and vegetables, although waterblommetjie bredie is a more piquant variety made from a type of indigenous water lily), spicy samoosas and many gooey desserts. The traditional style has been refined over the centuries, taking on some elements of early Dutch, French Huguenot and Indian cooking. Outdoor entertainment in Cape Town invariably centres around the braai or braaivleis; this is usually a standard barbecue of meats such as long-marinated lamb, venison, beef, chicken, spicy boere-wors (‘farmer’s sausage’), served with potatoes baked in foil, and a selection of salads. The men invariably do the cooking, which is considered to be something of an art form. Charcoal, wood or both are used for fuel, the wood imparting a distinctive and tasty flavour to the food. Also very popular is potjiekos - a flavourful stew that is cooked gently for several hours and sometimes even days in a giant cast-iron pot over an open fire. Traditional African cuisine does not yet appear on very many restaurant menus, but this is now starting to change, as more and more innovative chefs have started introducing elements of African cuisine to their dishes. For most black people in South Africa, eating remains a practical necessity; the ordinary meal of the day in the townships tends to be a no-nonsense affair in which pap (maize-meal), boiled meat or cabbage, or samp and beans is the order of the day. But living standards throughout the country are slowly improving. (...)

This is an excerpt from the guide: The Best of Cape Town (Globetrotter), by Peter Joyce.