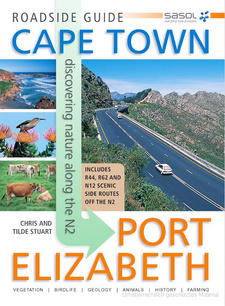 In this Sasol Roadside Guide Chris Stuart and Tilde Stuart take a closer look at what the traveller can see along the N2 from Cape Town to Port Elizabeth, and on selected scenic side routes.

The N2 takes you down to the northern shore of Mossel Bay. The town of the same name has grown considerably in recent years, both as a base for the Mossgas refinery and offshore gas wells, as well as a developing tourist centre. The earliest European visitors were Portuguese sailor/navigators who made first landfall here in the fifteenth century. At the site of the museum in the town there is South Africa's best known white Milkwood tree, and a vast specimen it is, which was used by these sailors as a location for leaving messages for passing ships, hence its name of Post Office tree. As you descend, you are rewarded with a magnificent view across the bay. In the distance, steep coastal cliffs and densely vegetated sand dunes fill your view. Sea-spray mist often rises up the seaward slopes and, besides rain and fog, is an important form of precipitation. It forms over surf and close to the ground in the late afternoon when strong offshore winds abate, and becomes increasingly dense by evening. Much of the moisture is deposited on the seaward slopes of sand dunes, but may also finger its way into estuaries and over other coastal low ground. This form of moisture is vital for the survival of sand-dune vegetation. If you look straight over the bay, you will notice a small rocky islet, known as Seal Island, clearly visible in the foreground. It is best viewed when travelling from west to east towards George. The island is a barren outcropping of Table Mountain quartzites - the same as those that underlie the entire Mossel Bay and Great Brak River areas. It is a significant resting site for Cape fur seals and several hundred may rest here at times. They can be clearly seen through binoculars from the N2. The island becomes a great attraction to the great white sharks that cruise these waters. This is the only island in the bay and apart from being a hauling out spot for the fur seals, seabirds such as African Penguins and Cape Cormorants also roost here. Over the next few kilometres beyond Mossel Bay, the coast is being opened up for development to the detriment of natural vegetation that the Garden Route is renowned for. Only small pockets of indigenous vegetation remain protected. You will notice bush-like Krantz Aloes in the road cutting. Further along, and still within sight of the town of Mossel Bay, you will encounter the crossing of the Hartenbos River. Unfortunately, this area is seeing burgeoning development of residential sites on both sides of the road. The Krantz and Bitter aloes become increasingly common across the coastal plain, eastwards, especially on slopes and in rocky places. Trees here are mostly Rooikrans. The short, red plants on the mudflats, however, are salt-loving, indigenous Salicomias. These are common in most estuaries and saline-influenced lakes of the region and are particularly colourful in late summer and autumn. Black-headed and Grey herons, Cattle Egrets and Grey-headed Gulls are occasionally seen here. When the first Europeans arrived at the Cape, they did not enter an uninhabited wilderness. The first contact between Europeans and indigenous peoples occurred in 1488, and was recorded by Portuguese sailors of the Bartolomeu Dias expedition. In 1497 another Portuguese explorer, Vasco da Gama, obtained cattle in this area by bartering with the Khoekhoen. The journals of the early Portuguese sailor-explorers contain descriptions of their impressive herds. The records also describe numerous fires that were set by the Khoekhoen in order to stimulate new plant growth for both animal grazing and human food. The fires may also have formed a part of Khoekhoen hunting strategy. As you continue your journey on the N2 further away from Mossel Bay you pass the turn-off (R328) to Oudtshoorn via the Robinson Pass to the north. A short stretch further (approximately 2 km), you will pass an Ostrich farm and pastures, to the north of the road. The innocuous-looking Ostrich should be treated with the greatest respect. Never enter its field or paddock unless accompanied by an expert as Ostriches can deliver a powerful kick. [...]

This is an excerpt from the book: Sasol Roadside Guide. Cape Town-Port Elizabeth: Discovering Nature Along the N2, by Chris Stuart and Tilde Stuart.