On Route in South Africa (Sunbird), by B.P.J. Erasmus 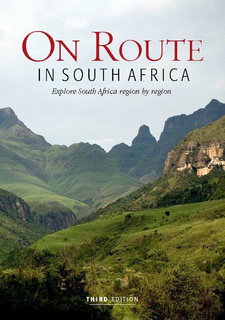 On Route in South Africa by B.P.J. Erasmus recounts the stories and legends, both amusing and tragic, of hamlets, villages, towns and cities. It introduces the reader to the larger-than-life characters of South African history and tours the hillsides and valleys.

The Overberg is a vague geographical designation that originally referred to the entire Cape interior, all the land 'over the berg', that is beyond the mountains of the Hottentots-Holland range, which barred the eastward expansion of Commander Jan van Riebeeck's settlement in Table Bay, For the purposes of this review, the Overberg region is therefore taken to encompass that portion of the southwestern Cape from the Hottentots-Holland mountains in the west to the Albertinia area in the east. In fact, the stretch from Heidelberg to Albertinia is regarded by many as part of the western section of the famed Garden Route, but is included here for convenience. The Overberg is bounded in the north by the Langeberg range and in the south by the sea. Agriculture and animal husbandry have remained the mainstays of the economy of the Overberg for more than two and a half centuries, The flocks of the early pastoralists were bred from stock of the fat-tailed, haired 'Cape sheep' obtained from the indigenous Khoe folk who settled in the area, It was, however, only alter the woolled merino variety was introduced in 1.789 that the Overberg's sheep farms were launched on the road to the prosperity they enjoy today. The region's most important crops are fruit - most especially apples in the Elgin-Grabouw area - and grains. At first these grains were grown only for consumption of the locals, but captured a wider market after the construction of Sir Lowry's Pass leading to Cape Town. The coastal region also includes many fine beaches along neatly sculpted bays. But beautiful as this coast is, it is also notoriously dangerous - especially around Cape Aguihas ('the Cape of Needles'), the most southerly point of Africa and the graveyard of many an unwary or luckless vessel The local fishing industry docs not rival that of the Cape's west coast, but has steadily grown in importance over recent years. The seaside resorts are nevertheless very popular among experienced, anglers, and many record, catches have been documented in these waters. The Overberg boasts some of the finest expanses of indigenous jynhos vegetation, in the country, and its coastline and estuaries are home to a great variety of aquatic birds and marine wildlife. There is a choice of two roads to the Overberg from Cape Town. The first is the N2 over Sir Lowry's Pass, which will be the main route for our review. The second is the R44/43 from Gordon's Bay along the seashore, which leads to and through a number of resort centres. The latter would have been a far easier route for the early Overberg settlers - if engineering techniques employed in the construction of the road in the 1930s had been available in the 18th century. (...)

This is an excerpt from the guide: On Route in South Africa (Sunbird), by B.P.J. Erasmus.

Our ultimate 4x4 Trips Collection by MapStudio is a must-have book for all 4×4 travellers. See Southern Africa like never before!

MapStudio's Wildlife Southern Africa is a great guide to over 300 National Parks and Reserves in South Africa, Namibia, Botswana, Zimbabwe, Mozambique and Lesotho.

Our Top 4x4 Trips features chosen and prooved 4x4 tracks in South Africa, Namibia and Botswana and is a product of MapStudio.