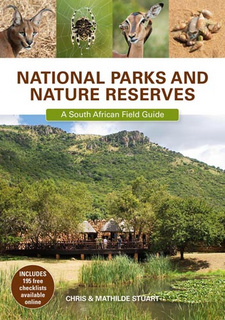 This field guide, National Parks and Nature Reserves: A South African Field Guide, has two main aims: to outline the natural history of the best conservation areas that South Africa has to offer, and to assist the reader in identifying the more common mammals, birds, reptiles, amphibians and plants that occur in its national parks and reserves. The first of this field guide's two sections, and by far the bigger of the two, deals with the natural history of the conservation areas. The second constitutes an extensive selection of images for easy identification of the mammals, birds, amphibians, reptiles, trees and flowers that you may encounter there. Readers will also be able to access a web page (www.parksandreserves.co.za) with a total of 195 comprehensive checklists of vertebrates (mammals, birds, reptiles, amphibians and fish) for each park and reserve we cover in this guide. These downloadable lists are free and contain scientific names for each species as well as their English and Afrikaans common names. In addition, German and French common names are supplied for all the mammal and bird species. The plains, uplands and deserts of South Africa were once the domain of great herds of game, which were closely attended by predators both large and small. The Khoekhoen peoples and the Bantu migrants hunted the game and burned the vegetation, and their domestic animals competed for grazing; but the wholesale slaughter began with the arrival of the first settlers of European origin, and the surviving game was pushed ever northwards and eastwards as more land was fenced for grazing cattle and sheep. Within 300 years the thundering herds were no more, victims of humankind's hunger for land and the insatiable demand for game meat, hides and ivory. South Africa has been at the forefront of conservation efforts from the very beginning. At the end of the 19th century Paul Kruger, president of the Zuid-Afrikaansche Republiek, realized that the great game concentrations he had hunted in his youth were fast disappearing. He was far-sighted enough to proclaim Africa's first formal conservation area, the Pongola Game Reserve, in 1884. The British colonial authorities in Natal proclaimed Umfolozi (now iMfolozi), Hluhluwe and St Lucia as game reserves in 1895. This was followed in 1898 by the establishment of the Sabie Game Reserve, forerunner of the flagship park that was later to carry Kruger's name. Through political expediency, or stupidity, Pongola was deproclaimed in 1921; conservation areas increased very slowly during the first half of the 20th century. In recent decades a growing conservation awareness has resulted in the proclamation of new areas and a great expansion of existing national parks. The conservation areas of South Africa fall into several categories: national parks, game reserves and nature reserves controlled at provincial level, and those that are privately owned. The national parks enjoy the highest level of legal protection, although one (Vaalbos) has been deproclaimed in recent times; human activities are fairly strictly controlled and exploitation of natural resources is greatly limited. Provincial reserves are more vulnerable, partly because of limited resources, funds and staff levels. [...]

This is an excerpt from the guide: National Parks and Nature Reserves: A South African Field Guide, by Chris Stuart and Tilde Stuart.