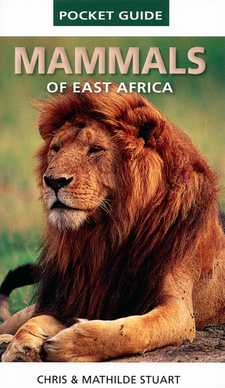 Mammals Of East Africa Pocket Guide covers all of the common, some of the less common mammal species and is written by Chris Stuart and Tilde Stuart.

The name 'East Africa' conjures up vistas of grassland scattered with umbrella thorn trees, and home to vast herds of hoofed mammals. Yet the region is comprised not only of this, but of many different habitats, from high mountains to rain forests, great lakes and rivers to coastline, all providing suitable living space for more than 360 species of terrestrial mammal. The mammal species range in size from elephants that may weigh several thousand kilograms, to bats, shrews and mice that tip the scales at little more than a few grams. Politically East Africa consists of Kenya, Uganda, Tanzania, Burundi and Rwanda. However, wildlife in the last-mentioned two countries has largely been eradicated. To the east lies the Indian Ocean and to the west are the four great lakes - Edward, Victoria, Tanganyika and Malawi. Here are the legendary Ruwenzoris, or Mountains of the Moon, and the mighty peaks of Kilimanjaro, Kenya and Elgon. A chain of soda lakes runs like an uneven necklace down the floor of the Great Rift Valley. Where the mighty Nile River rises there are active, dormant and long-dead volcanoes. It is a region not only of great topographical diversity but also of numerous vegetation types. The vegetation map has been greatly simplified but does indicate seven of the most important vegetation types that you will encounter during your East African travels.

Outside the conservation areas much of the landscape has been greatly modified by the actions of growing human populations. Large tracts of natural bushland have been cleared for agriculture, both subsistence and commercial, and trees have been turned into charcoal. Human settlements have increased and existing ones have expanded. Poaching has resulted in decreasing mammal diversity and populations. Nevertheless, those interested in wildlife, and specifically in mammals, have much to look forward to in the region. We have included most of the larger and more conspicuous mammal species. In addition, a few of the more unusual species such as the pangolin, aardvark and porcupine have been included, as well as representatives from the different families and genera of bats, shrews, elephant shrews (sengis) and smaller rodents.

Identification pointers: A large, stoutly built mongoose with a uniformly dark brown and rather shaggy coat. Some individuals may be almost black, or reddish-brown, but from a distance all look blackish and, at close quarters, grizzled. Hair on the muzzle and feet is short, but long and erectile on the tail.

Similar: Could only be confused with Alexander's cusimanse (Crossarchus alexandri), but overlap may occur only in far-western Uganda; sometimes mistaken for otter, but latter is larger, sleeker and variably marked on throat.

Behaviour: Nocturnal, crepuscular and terrestrial. Readily wade and swim. Probably territorial. Sightings are mainly of solitary animals, although pairs and females with young sometimes seen. When foraging they follow well-used pathways, and droppings are deposited at regularly used latrine sites - often near water. When hunting they rely on sight and hearing. Their long toes probe under and among rocks for prey.

Reproduction: Births and young recorded in the region May to August, but are based on few records and are possibly aseasonal.

Drop: 1-3 cubs, about 120 g, in dense vegetation cover (reed beds), rock crevices, or the burrows of other species.

Calls: High-pitched bark alarm call is usually the only one heard.

This is an extract from the guide: Mammals of East Africa Pocket Guide, by Chris Stuart and Tilde Stuart.

Flying Mammals Quick ID guide to the bats of Africa

Flying Mammals Quick ID is a compact and quick ID identification guide to the bats of Africa.

Avian Architects: Quick ID is a compact and quick ID identification guide to nests and eggs of southern African birds.

Primates Quick ID is a compact and quick ID identification guide to Africa's great apes, true monkeys and their relatives.

Skullduggery is a compact and quick ID identification guide to skulls of southern and East African mammals.