Gender and Colonialism: A History of Kaoko in North-Western Namibia 1870s-1950s, by Lorena Rizzo 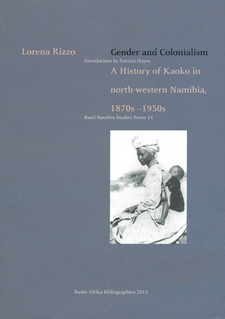 Lorena Rizzo earned her PhD in History from the University of Basel in April 2010. The title of her thesis was Gender & Colonialism. A History of Kaoko in Northwestern Namibia, 1870s-1950s.

Less is more? History and the Kaoko

The force of residual histories that are delineated in this new work on Kaoko; and the uniqueness of their scale; open up specific new horizons on Namibia and the subcontinent. In this preface; I wish to comment briefly on the many enjoyments produced by this new sense of history and its parallel methodological moves. This region, whose naming Lorena Rizzo turns into a colonial problematic, has been inhabited and passed through by numerous populations. These processes have left fragmented histories and indeed very fractured archives. While many have passed through, and those who resided there dwelt only in pockets or on the move, this supposedly isolated region has mostly been passed over by many scholars. But in some ways it holds the key to unfinished debates from other parts of Namibia and indeed the entire length of the southwestern coast of Africa. Why? In line with the tropes of the 'last frontier7 (coined by popular author Negley Farson), and of the 'lonely outpost of empire' (the Resident Commissioner Manning's phrase) where time 'stood still', processes and temporalities which had run their course elsewhere or been violently interrupted by the two colonialisms endured by the territory, tended to keep going in this remote north-western part of Namibia. The Kaoko region with its fragile ecology and relatively open frontiers extends a variety of histories, that we possibly imagined had been concluded elsewhere. For instance, Rizzo's study takes the arguments of the late Brigitte Lau on the Oorlams into a completely new dimension, given that two offshoots of the Oorlams settled in Kaoko and have not previously been subject to close historical scrutiny. This story of dynamic militarised, hybridised black groups who lived out the idiom of the 'boer' commando did not end with the histories of the Namibian south which have received considerable attention elsewhere. The early part of this book therefore takes up an unfinished story, which is also part of a much bigger southern African story about the impact of merchant capital on the subcontinent. Joseph Miller's monumental work on Angola, and a host of historians in South Africa who debated the origins and aftermath of the 'mfecane',2 have all engaged with questions around commoditisation and the political and socio-economic shifts it engendered; and for many years it has seemed as if there was nothing left to say This is not so. Rizzo takes us squarely back into these issues; and it must be said that very few scholars have posed such penetrating questions about the ensuing militarization and masculinisation as she does here. The promise of this new history is that it extends the field of social history not only geographically but also with the additional tools of a cultural turn in the analysis of southern Africa. Aside from the Oorlams sequel; this research provides another set of insights into South African colonial rule. Those of us who have worked on the central Owambo floodplain with its centralised kingdoms have often been criticised for not taking more account of the less centralised societies to the west; which is the less obvious terrain Rizzo deals with; both historically and archivally. [...]

This is an excerpt from the study: Gender and Colonialism: A History of Kaoko in North-Western Namibia 1870s-1950s, by Lorena Rizzo.

Gender and Colonialism: A History of Kaoko in North-Western Namibia 1870s-1950s

Gender and Colonialism: A History of Kaoko in North-Western Namibia 1870s-1950s is an attempt to convey a multi-faceted history of a region that has only recently been tied into a national historiography.

The photographic collection "Usakos: Photographs Beyond Ruins" consists of images taken from albums of old location inhabitants of the 1920s-1960s.

'New Notes on Kaoko' questions the myth of Kaoko, an image of the region as isolated and exotic, through written texts and also through an examination of photographs.