Gardens to Inspire, by Keith Kirsten 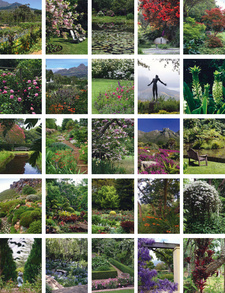 Gardens to Inspire presents a personal view of some of South Africa's great gardens through the eye of plantsman, horticulturalist and garden designer extraordinaire, Keith Kirsten.

Benvic: Arboretum in the mist

Travel 34 kilometres from the KwaZulu-Natal Midlands town ot Howick, on the long and winding road through the rolling misty hills of the Karkloof, towards the hamlet of York, and you're in for a big surprise. Benvic Farm, with its magnificent 70-acre (30-hectare) arboretum, is a truly magnificent national treasure. Nurtured by four generations of the Geekie family, the garden and restored homestead draw visitors from all over the world. The words on a plaque erected in the garden in memory of John Geekie, the founder of Benvie, who was born in Dundee, Scotland, in 1836 and came to South Africa at the age of 20, say it all: "He that planteth a tree is a servant of God, he provideth a kindness for many generations, and faces that he hath not seen shall bless him". Named after two parishes between Dundee and Coupar Angus, where the Geekie family has lived since the 13th century, Benvic Farm is a living testament to the passion, determination and vision of John Geekie and his succeeding generations. A true visionary, Geekie fell in love with the gentle hills and mist of the Natal Midlands and designed and planted a garden that has become a living monument to his adventurous spirit. Visitors are filled with awe, and mesmerised by the beauty of the towering 130-year-old exotic trees, which were brought here from all corners of the Earth. John Geekie came from a family of ship chandlers and cabinet makers. After landing at Cape Town, he travelled north to Durban and then to Pietermaritzburg. Initially, he established a successful hardware and building business, being involved in the construction of many old Maritzburg buildings, such as Government House, the portico of the old station, and the Premier's residence. For his personal residence, Geekie set out to find a property that would allow him to indulge his passion for exotic trees by creating an arboretum, as well as have enough space to farm cattle and sheep. The Midlands must have reminded him of his homeland because, in 1883, he purchased a 5700-acre farm with a southeast-facing aspect, cool misty conditions, and a high annual rainfall. On taking ownership of Benvie, all felling of yellowwoods, sneezewoods and stinkwoods from the indigenous forests ceased. In 1890, aged 54, John Geekie returned to Scotland, where he met his future wife, Helen Baxter. They were married in Durban and settled permanently at Benvie. He hired experts from Kew Gardens to plan the layout of the arboretum and, after five years of planning and planting, Geekie saw his creation, which has since become the largest exotic arboretum in South Africa, take root and come to life. Geekie ordered trees and shrubs from all over the world: hydrangeas, chestnuts, hickory, pecan and walnut trees, magnolias, and fruit trees as seedlings, rooted and packed in moss from PJ Berckmans Company (Fruitland Nurseries) of Augusta, Georgia, in the USA (the home of the world-famous golf course). The trees were shipped to Durban, then railed up to Merrivale and finally carted by ox wagon along 34 kilometres of muddy tracks to Benvic. From Howden's Nursery in Inverness, Scotland, came the seeds of 120 species of conifers. The Scots pines, silver firs and Douglas firs were not successful, due to the different climatic conditions between the Highlands and the Midlands, but all of the other conifers planted at the outset still stand tall today. No other deciduous species were ever introduced, thus making Benvie the largest conifer arboretum in the country. Gifts of Azalea mollis and camellias were received from Durban and Pietermaritzburg Botanical Gardens; today, they are a sight to behold. (...)

This is an excerpt from the book: Gardens to Inspire, by Keith Kirsten.

Keith Kirsten’s Garden Plants & Flowers is a compact directory of trees, shrubs and flowering plants that are ideal for growing in South African gardens.

Kirstenbosch: The most beautiful garden in Africa

Finely crafted text and lavishly illustrated with photographs and artworks tells history of Kirstenbosch, the most beautiful garden in Africa.