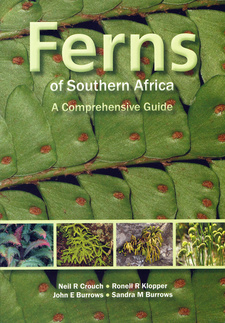 Foreword to Ferns of Southern Africa:

The first comprehensive book on the ferns of southern Africa, authored by Thomas Robertson Sim, was published in 1892. Since then the diversity of the region's ferns has been the subject of a number of Important publications, among them Southern African ferns and fern allies by eminent naturalists John and Sandra Burrows. Published In 1990 and illustrated by colour plates and exquisite line drawings, this work has long been out of print. The Burrowses have now been joined by co-authors Neil Crouch and Ronell Klopper, both professional botanists and fern enthusiasts, to give us Ferns of southern Africa. Not only is It a substantial update of their original publication, but the first comprehensive book on the ferns (including both the lycophytes and true ferns) of the subcontinent to be fully illustrated in colour and presented In field guide format. The most impressive aspect of the southern African flora is Its diversity. Yet, despite a wealth of field guides to many of Its constituents, there is little doubt that the ferns have been somewhat neglected. Although the local flora is dominated by flowering plants, It may come as a surprise to many that over 300 species of ferns are native to the region. This is an unexpectedly high number, considering that more than half of the subcontinent Is semldesert or desert. Ferns are mostly delicate plants associated with ush forest growth where they prefer cool, moist, shady places, yet quite a number of local species have evolved to tolerate not only extreme drought and heat, but also full sunlight and regular veld fires. Among the most intriguing are the so-called resurrection ferns, hardy plants with leaves that shrink and dry out under conditions of drought, to revive and unfold only when moisture becomes available again. In the history of life on earth, the ferns occupy a very special place. They were the first land plants with well-developed vascular tissue, an Innovation that not only enabled them to grow taller, but also to give rise to the first trees. Now well past their heyday, the ferns were already flourishing about two hundred million years before the flowering plants made their appearance. Ferns may lack the extravagance of brightly coloured flowers, and they do not produce fruits or seeds, yet they are widely recognised by, and admired for, their often finely divided and delicate leaves in various hues of green. However, the relative ease with which the ferns are recognised as a group, stands in contrast to the difficulties usually experienced by both botanist and the layperson to identify species. The concept of fern families can be particularly hard to grasp, especially when compared with the often distinct floral patterns displayed by some of the more common flowering plant families. Undoubtedly the most exciting publication yet to appear on the ferns of southern Africa, this comprehensive guide combines a passion for ferns with up-to-date and well-researched scientific and field data. With Its sound scholarship, user-friendly Identification guides, detailed descriptions, usefu distribution maps and superb pictures, all combined In a pleasing design, this book should appeal to both lay readers and biologists. At last we have a publication that is about to challenge the common belief that the identification of ferns should best be left to the experts. Certainly this field guide will open a whole new world to nature lovers and help foster an interest In a fascinating component of our flora. This is a book to be read and browsed with delight and to be carried In the field for personal observation and the enjoyment of identification. It is a great pleasure to strongly recommend this Informative and useful publication to anyone who wants to know more about the ferns of our region.

This is an excerpt from the guide: Ferns of Southern Africa, by Neil Crouch, John Burrows, Ronell Klopper and Sandra Burrows.

Succulent Flora of Southern Africa is an authoritative guide for academics and lay enthusiasts alike.