Dangerous creatures of Africa, by Chris Stuart and Tilde Stuart 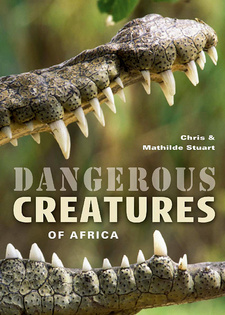 From the rampant and powerful to the harmless looking and almost invisible, Dangerous Creatures of Africa presents the continent's most feared and potentially lethal creatures.

Africa is riven by civil wars, cross-border conflicts, starvation and death by disease. The southern region of Sudan was in a state of civil war for 21 years, when some 1.5 million people died, while at least 200 000 have been killed in the region of Darfur in the past four years. In the Democratic Republic of Congo possibly as many as three million humans have died from violence, hunger and disease since 1997. It is believed that despite the 'peace' in that country, 1000 people continue to die every day. A tenth of the population of Somalia has died since 1991. Diseases and parasites thrive and prosper in situations of chaos, climatic extremes and warfare, situations all too well known in Africa. In South Africa alone about 15000 people die on the roads every year, and more than 10000 are killed by bullet, knife or other assault. By contrast, dangerous creatures kill fewer than 50 with their venoms and poisons; and stompers, homers, tuskers and biters perhaps account for 100 human fatalities each year in southern Africa. The number of humans killed or debilitated in Africa by the insect-borne diseases, such as malaria, still tops the list. The death toll and misery resulting from disease could be greatly reduced with the application of simple and often basic measures. Sadly, due to poverty and the lack of political will, death tolls remain high in many countries and regions. In most cases, whether wittingly or not, we humans create the scenario for injury and death as a result of an encounter with one or other of our dangerous creatures. This book is not intended to frighten but to enlighten, to show how to avoid conflict situations and prevent discomfort. Most situations can be avoided and knowing how to do this allows us to enjoy our environment and the many creatures with whom we share it. Whatever our conceptions about our fellow creatures, most prefer to avoid conflict with us. It is possible to avoid contact with disease-carrying parasites, but they remain the most dangerous creatures of all. Avoidance is possible in some cases but the risk of infection, or having parasites sharing your body, is still quite high. Together we share an increasingly threatened planet, but the most dangerous creatures of all, the ones damaging the planet directly or indirectly, are human beings - well over six billion of us.

Africa is blessed with a great diversity of mammals. They range from the largest land mammal, the African elephant weighing from 2.8 to 6.3 tons (bulls are larger than cows), to one of its smallest, the dwarf shrew at just 3.5 grams. Virtually all, given the circumstances, can injure or, on rare occasions, cause death. Throughout prehistory and recorded historical times man has come into conflict with wildlife, whether it be for space, food or sport hunting. In as many as 85 % of cases where an animal has attacked a human it has been found to have been wounded, trapped, pursued or otherwise pushed to defend itself. Some attacks are unprovoked and cannot be adequately explained - such as the time an elephant cow initiated a full charge over an open floodplain when she was more than a kilometre from our vehicle. At first we believed she would break off the charge, but she kept after us for at least two kilometres. This was uncharacteristic given the distance involved, but poaching was rampant in the area at that time and she might have had a bad experience with a vehicle, or been wounded. There are cases where a person encounters an animal that has been wounded or injured, follows the Yules of the bush', but is still attacked. It is possible to enter a threatening situation without being aware of the danger - the animal cannot be blamed if it retaliates in what it sees as defence. [...]

This is an excerpt from the book: Dangerous creatures of Africa, Chris Stuart and Tilde Stuart.