Chamberlain's Birds of Africa south of the Sahara Edition 2010, by Ian Sinclair and Peter Ryan 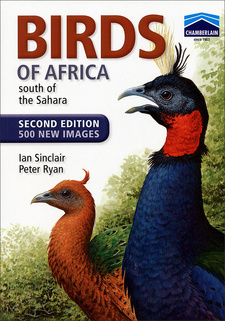 Chamberlain's Birds of Africa south of the Sahara Edition 2010, by Ian Sinclair and Peter Ryan.

Africa is one of the best places to go birding. The continent is second only to South America in terms of numbers of bird species, and arguably offers more rewarding birding than other tropical regions - thanks to the large number of conspicuous species associated with savanna and woodland habitats. Africa is home to two endemic bird orders, 10 endemic families (with two more only reaching Madagascar or Arabia), and of the more than 2100 species in sub-Saharan Africa, almost 1400 are restricted to the region. This book is a concise identification guide to the birds of sub-Saharan Africa. Preparing it has been a daunting task, given the very large number of species, but we believe it is useful to bring all the region’s birds together in one volume. We hope that it will encourage greater interest in Africa’s birds, and promote birding throughout the region. Historically, birding attention has been divided into three general areas: west Africa, east Africa and southern Africa. This balkanisation of birding activity was exacerbated by political differences and resulted in some unfortunate consequences. At a prosaic level, it led to regional differences in common names. More significantly, it greatly decreased our knowledge of areas outside the classic boundaries of areas of interest. For example, we know much more about the birds of southern than northern Mozambique simply because the southern part of the country lies south of the Zambezi River, and thus falls within the rather arbitrary limits of southern Africa. Similarly, east African birders have tended to stop their activities at the DRC border, in part because the DRC fell outside ‘their’ area. The aim of this book is to promote a more holistic view to birding throughout the continent, and to highlight species that fall outside the three regions covered in traditional field guides.

Examples from Chamberlain's Birds of Africa south of the Sahara:

Parisoma lugens
13-14 cm
A dull brown warbler with paler underparts, especially belly and vent. Told from Garden Warbler by its white outer-tail. Occurs at lower elevation (below 2500 m) than Bale Parisoma in Ethiopia. Much larger and shorter-tailed than Buff-bellied Warbler (p. 524). Eye is dark red-brown.

This is an excerpt from the guide: Chamberlain's Birds of Africa south of the Sahara Edition 2010, by Ian Sinclair and Peter Ryan.

Chamberlain's Birds of Africa south of the Sahara Edition 2010

Despite its exceptional coverage, Chamberlain's Birds of Africa south of the Sahara Edition 2010 is compact enough to use in the field, and follows the standard field guide format.

What to look for when purchasing equipment, what field guides and other resources exist, and how cultivate skills in the field

Light and handy for use in the field, Birds of Namibia (Pocket Guide) will give birders an excellent introduction to Namibia's bird life.

This new larger illustrated guide is based on the recently updated fourth edition of the standard-format Sasol Birds of Southern Africa.

Pocket Guide: Birds of Southern Africa has been designed in pocket-size and primarily for use in the field.

Birds of Africa south of the Sahara

Easy-to-use, illustrated map to 200 of the top birding sites in southern Africa.

A Photographic Guide to Birds of Southern Africa

A Photographic Guide to Birds of Southern Africa is a ideal pocket-sized birder's companion.

A Photographic Guide to Birds of Namibia

This photographic guide is a compact, easy-to-use guide to the most common birds of Namibia.

This complete photographic field guide to birds of Southern Africa describes and illustrates all 958 birds, plus 17 species from Antarctica and Southern Ocean Islands.