Cape Town: The Story of Cape Town, Robben Island and the Cape Peninsula, by T. V. Bulpin and Peter Joyce 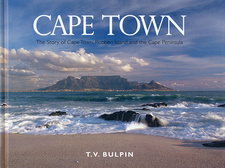 Late T. V. Bulpin and Peter Joyce did the editing of the nicely made coffee-table book, The Story of Cape Town, Robben Island and the Cape Peninsula that introduces to spleandours of this wonderful region.

[...] How did it all start? As mountains go, Table Mountain is no giant. It is only 1086 m high but, standing next to the sea, every metre of it is visible. It is one of the most renowned shipping landfalls on Earth. It stands on the southwest end of Africa, its distinctive shape looming up as a gigantic beacon halfway on one of the globe's principal trade-routes, the sea lane around Africa linking east to west. In making this mountain and positioning it so strategically, nature revealed a piquant sense of humour and sympathy to human needs. Not only was the mountain so positioned as to be seen from far out to sea, but its unique shape made it easily identifiable. To make it even more distinctive, nature provided it with a cloud table-cloth, a phenomenon created by the action of the southeasterly wind, which carries a heavy load of moisture, picked up in its passage over the warm waters of the Mozambique-Agulhas Current which reaches the end of its flow in False Bay. Orographic condensation turns this moisture into cloud as the wind is forced to rise over the mountain top and suddenly cools. Tumbling over the northern edge of the tabletop, the wind falls immediately back to a lower and warmer level. The cloud disappears at this level and Table Mountain is left with its table-cloth. Who were the first human beings to see the majestic spectacle of Table Mountain and its cloud? Fossils and artefacts at least 15000 years old have been found in caves in the Cape Peninsula. Until recently examples of rock art on the walls of cave shelters on Table Mountain itself were reminders, until they faded away, of the presence in former years of people of the Later Stone Age. Legends tell that Phoenician and Arab sailors, 2000 and more years ago, were the first to reach the mountain from the sea. The Phoenicians, circumnavigating Africa for the first time from Europe, are said to have landed at the foot of the mountain to rest, repair their ships, and replenish their food by planting and reaping crops of wheat. The Arab sailors, exploring the east coast of Africa, described Table Mountain as a magic place, with a magnetism which drew ships to doom. The Phoenicians were looking for a way around the southern end of the African continent; the Arabs more particularly for an extension of their slave, ivory and gold trading enterprises on the east coast. To both the pioneer groups and the countless seafarers who followed them, Table Mountain became the eagerly looked-for beacon at the end of Africa. Fresh water could always be obtained there from the mountain streams. Meat could be bartered from the nomadic pastoral people of unknown name who grazed their herds in the area. It is not known who were the first of the modern European seafarers to see Table Mountain and its bay the records of the discovery of the Cape of Good Hope by Bartholomeu Dias in 1488 are incomplete and make no mention of it. The written story started in 1503 when the Portuguese admiral, Antonio de Saldanha, on his way to the East with a fleet of three ships, mislaid his position and found himself quite inadvertently sailing into Table Bay. [...]

This is an excerpt from the book: Cape Town: The Story of Cape Town, Robben Island and the Cape Peninsula, by T. V. Bulpin and Peter Joyce.