Zoo Park: A History. Documentation of the former Zoo Park (1887-1958) in the center of Windhoek, by Brigitte Lau and Christel Stern 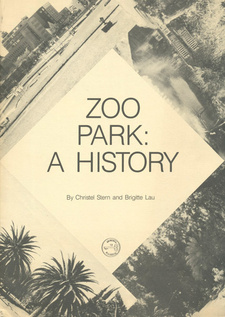 Zoo Park: A History. Documentation of the former Zoo Park (1887-1958) in the center of Windhoek, by Brigitte Lau and Christel Stern.

Christel Stern and Brigitte Lau compiled this useful and most interesting guide to the local history of Windhoek's Zoo Park, which originally existed from 1887-1958.

In 1897 the German colonial administration selected a central site in Windhoek and established a memorial there honouring the German soldiers who fell in the war against Hendrik Witbooi (see picture above). This was the beginning of today's Zoo Park. No specific files or even reports on the development of this site into a park could be traced (nor was this possible for the other two substantial parks established by the early colonisers along Kaiser Street), but since c. 1904 plans of Windhoek and books refer to the site as "Denkmalsgarten" (Memorial Garden) or "Truppengarten". This suggests that trees were planted and a rudimentary park established for no other reason than to honour the memorial and create a place of shade for Windhoekers. The colonial government transferred the "Denkmalsgarten" to the town of Windhoek by treaty on 3 May 1911. The Town Council began to develop the park more systematically, albeit on a small scale: supporting walls, steps and railings were built; the council also employed a gardener to expand the nursery. The site had a strong natural fountain; surplus water was channelled to basins on surrounding sites. In 1915, the garden was described as "Beautiful park with war memorial, fountains, benches and a fenced-in children's playground". In August 1916, the council applied to the South African Occupation Forces for permission to establish a zoo in the park. The request was granted. Then as later, most animals were donated by farmers. Plans to establish a large-scale aviary did not come to fruition. Between 1922 and 1929, the council developed Zoo Park with enthusiasm: marble water fountains, a garden bridge (see photo), benches, equipment for the children's playground, railings, bird baths, garden vases, flower pots and even Mr Dinter's famous collection of local succulents was established and planted; there was also an overseer in addition to the gardener. In the same period, the council bought two tanks to catch rain water for the nursery - an apparently successful move as suggested by the records. The gardener ordered large quantities of seeds, and more trees, eucalyptus trees amongst others, were planted. The council nursery was apparently also famous for its prosopis tree seeds and saplings, receiving orders from South Africa and other parts of the world. The zoo itself grew. By 1930, the park housed one or more of the following: guinea fowl, oryx, duiker, kudu, hartebeest, leguan, monkey, meerkat, leopard, jackal, porcupine, polecat, snake, white rabbit, springbok, wild dog, eagle, hawk, ostrich, a number of unnamed local birds, and hare. By far the majority of these animals were presents from farmers, and today the rumour still exists that at one stage the park housed a leopard tamed by the German governor Leutwein. However, in 1932 the council decided to close the zoo and only retain the birds. The animals were transferred to the then well-established game park behind the Tintenpalast, or given to hobby pet keepers. The name Zoo Park however, is still widely used. Thirty seven meteorite fragments were brought from the place of their fall near Gibeon between 1911 and 1913 to Windhoek, by the geologist of the German colonial government. After World War I they were placed in the Zoo Park, open to the public. [...]

This is an excerpt from the book: Zoo Park. A History, by Brigitte Lau.

Namibia in Jonker Afrikaner's Time is a study entirely founded on sources found in various Namibian and South African archives.

Three views in the past of Windhoek

Three views in the past of Windhoek focusses on very interesting aspects of local history.

The Matchless Copper Mine in 1857

This documentation consists of the correspondence of the manager of the Matchless Copper Mine in 1857, C.J. Andersson.

The diaries of Carl Hugo Hahn 1837-1860, this Volume 5 includes registers and indexes only.

The original Zoo Park architecture (1887-1958) has vanished. The Zoo Park is located in the center of Windhoek, this is its history documentation.