Where to journey inside Namibia, by Sakkie Rothmann 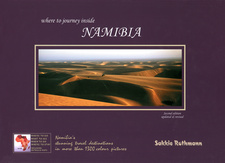 Geographical overview and introduction to Where to journey inside Namibia, by Sakkie Rothmann.

The surface area of Namibia is 823144 square km, which is almost four times the size of Britain, three times that of the Federal Republic of Germany and bigger than Texas. It is the second largest Southern African country and is bounded by Angola in the north, Zambia in the north east, Zimbabwe ot the easternmost tip of the Caprivi in the north east, Botswana in the east ond South Africa in the south. The Atlantic Ocean forms the western boundary. Namibia is largely part of the interior plateau landscape and the western drainage system of southern Africa and comprises three prominent elements; the narrow coastal plain rising from sea level to 500 m, the eroded escarpment reaching altitudes of 1500-2000 m, and the expansive interior plateau varying in altitudes of 1000-1500. This plateau is of diversified landscapes of rugged mountains, rocky outcrops, sand-filled valleys and grassy plains. The highest peak in Namibia is that of the Brandberg at 2580 m. Almost 60% of Namibia's landscape is dominated by plains and sand dunes. Namibia is a land between two deserts, the dunes of which provide a uniqueness to their characters. The Namib Desert, varying in width from about 80 km to almost 200 km extends along the entire western side from the Orange River in the south to the Kunene in the north. It comprises sand dunes and gravel plains out of which rise a number of inselbergs, which remained after their softer surroundings were eroded. The Kalahari Desert, in the east and north £ost of Namibia, extends into Botswana and covers about 259 000 sq. km. An arid savanna wilderness, it comprises broad, sandy plains whose vegetation varies from sparse covering of grasses and acacias in the south and western areas to very grassy and wooded areas in the east and north. It is not a true desert as it has higher than desert-levels of rainfall but its sands are poor, don't retain water and there is no surface water. The coastal Namib desert region has less than 50mm rain per annum, as does the deep south of the country. Rainfall increases from the coast towards the east to the extent that the central- and near-north receive from 200-400mm per year. The far north and the north-east receive up to 800mm. Consequently a distinction is made between the extremely arid coastal region, the arid southern interior, the semi-arid central and northwestern area and the semi-humid north-eastern extremity of the Caprivi. Only 32% of the country receives average rainfall of more than 400mm, and mean annual rates of evaporation are very high, thus reducing, even further, the effectiveness of the low rainfall.The country has perennial rivers only on its northern and southern borders: On the northern border are the Kunene River flowing west out of Angola, the Kavango, Kwondo and Zambezi Rivers flowing east out of Angola. The Linyanti and Chobe form the southern border of the tip of the Caprivi. The far southern border between South Africa and Namibia is formed by the Orange River. All other rivers are ephemeral, i.e. flowing only for a short time of from a few hours to a few weeks per annum after heavy rains. Natural vegetation is directly influenced by rainfall, or the absence thereof, and the proximity of river courses, ephemeral or perennial. Namib Desert vegetation varies from grass-plains in the eastern areas, which exist only after good annual rains, to succulents or near barrenness along the coastal and southern zone. [...]

This is an excerpt from: Where to journey inside Namibia, by Sakkie Rothmann.

The harsh and forbidden Sperrgebiet rediscovered: A tourist guide to the diamond coast. Lüderitz, Oranjemund, Aus, Rosh Pinah and the border regions.

More than grains of sand: Comprehensive travel and photo guide to the Namib Desert in the Republic of Namibia

Travel and photo guide 'More than grains of sand' introduces Western Namibia ranging from the the Sperrgebiet to the Kunene.

Journey through north-western Namibia is a photo companion to the attractions of the Kunene and Damaraland regions.