What We See. Reconsidering an Anthropometrical Collection from Southern Africa: Images, Voices, and Versioning, by Anette Hoffmann 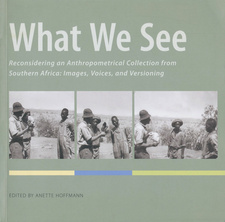 This book, edited by Anette Hoffmann, which accompanies the exhibition What we See, engages with the anthropometrical archive and its canned voices theoretically, visually and artistically.

Since the 19th century ethnographic museums have acquired life-casts, anthropometric photographs, human remains, and the results of measurements that were produced to conserve the features of non-European 'races', which the collectors conceived of as 'dying out'.1 These objects testify to the abhorrent historical realities of colonialism, but they cannot tell their own story. In many cases, these bodily remains, or imprints of bodies, form the unidentified, often unidentifiable, and therefore forever alien, ghostly remainders of anthropometric projects in storerooms of ethnographic museums and medical collections.2 Not giving an account of the people who were made to endure the practices of anthropometry, these object form the troublesome heritage of colonial anthropology. The collection produced by the German artist Hans Lichtenecker in Namibia (then South West Africa) in 1931, which is the starting point of this book and an exhibition, includes the recorded voices of people who were photographed, measured, and cast.4 The life-casts, imprints of faces, heads, hands and feet, consisting of a wax-like substance,5 were thought to realistically represent the features of "racial types".6 The recordings of the collection were produced with an Edison phonograph,7 and recorded on wax cylinders. All of these objects were brought together in Lichtenecker's project that explicitly aimed to create an "archive of vanishing races" from Namibia, for future generations.The exhibition and its this bookare the result of our engagement with Hans Lichtenecker's collection, with its sound recordings, and only later, with the photographs and life-casts of Namibians from 1931. I came across the recordings in 2004 during my research on oral poetry in Namibia in the Phonogramm-Archiv in Berlin. Because the wax cylinders are fragile, I was not allowed to listen to the recordings that Lichtenecker produced in Namibia until 2006, when the recordings were finally digitalized. The Phonogramm-Archiv is a marvellous place - or, should one say - a place of marvelling? Imagine a store-room filled with conserved voices and sounds: the Phonogramm-Archiv hosts almost 15,000 wax cylinders with recordings from all over the world that were collected since 1900. How many stories do these recordings tell? What can they tell about colonial anthropology and its expeditions? About researchers, colonised people, the collecting of specimens and artworks, anthropometric photography and the phonograph? The small catalogue Lichtenecker delivered to the archive, together with the recordings on 57 Edison wax cylinders, gives an overview of the variety of sound recordings this collection contains: songs in Afrikaans from Rehoboth, stories in Otjiherero and Khoekhoegowab, praise songs in Otjiherero, accounts of the war with the Germans, but also direct messages to Germany, and narratives, which tell of the process of the making of life-casts. [....]

This is an excerpt from the study: What We See. Reconsidering an Anthropometrical Collection from Southern Africa: Images, Voices, and Versioning, by Anette Hoffmann.

What We See. Reconsidering an Anthropometrical Collection from Southern Africa: Images, Voices, and Versioning

Accompanies the exhibition “What we See”, engages with the anthropometrical archive and essays reconsider anthropometric collections.