Traders and Trade in Colonial Ovamboland 1925-1990, by Gregor Dobler 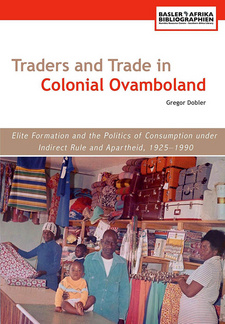 In its storyline, Gregor Dobler's book 'Traders and Trade in Colonial Ovamboland, 1925-1990' discusses that trade in Ovamboland obviously has a much longer history than European colonial expansion.

Chapter 1 gives an outline of this history and presents the background of the first stores' foundation. Long-distance trade routes had connected the different Ovambo polities to their southern and northern neighbors for centuries when European trade caravans began to regularly visit the region around 1850. Long-distance trade had largely been under the control of local rulers, who managed to integrate the new traders into the existing system of trade and largely monopolize the new trade goods. As guns and horses - excellent instruments of rule by force - were among the most important goods of European traders, the new trade made a stronger centralization of domination possible. As economic resources could now directly be converted into resources of domination, the gun trade encouraged rulers to extract higher taxes from their own subjects and to raid their neighbors more aggressively. Early colonial trade thus led to higher insecurity and to a redistribution of wealth and power in favor of chiefs and headmen. This was one reason for the military strength of the local polities which kept the region relatively free from colonial rule until World War I, but also for the depletion of resources which made the subsequent integration into the colonial economy through migrant labor more attractive. European caravan trade from the south dfied up when the new colonial power Germany controlled the gun trade more tightly, and above all when veterinary regulations following the rinderpest in 1898 prevented the exportation of cattle, until then the main exchange commodity, from Ovamboland to central Namibia. After the shock of the 1904 war, Germany declared Ovamboland a native reserve in 1906 and tried to avoid all disturbances which could dry up labor supply or lead to political or military trouble. The colonial government would have liked to increase trade, but it saw traders as a potentially disruptive element and prevented caravans from entering the area. It therefore wanted to open a store on one of the mission stations, which had long bartered European goods for services and local goods, but the attempt came to nothing. South Africa took over colonial control in South West Africa in 1915. For the first time, the administration established permanent stations in Ovamboland. It established its military supremacy by subjugating the largest polity Uukwanyama and killing its King Mandume. Since migrant labor was the most important resource Ovamboland had to offer, the new government tried as carefully to avoid 'disturbances' in Ovamboland as the old one. But South Africa, as well, regarded trade as a means to induce more young men to work in the colonial economy. When the Chamber of Mines in Liideritz asked leave to establish a trading store in Ovamboland in connection with a reorganization of labor recruitment, the administration saw this as a welcome opportunity for a closely controlled store to be opened, one for which mere profit would not be the most important guideline. Chapter 2 relates the history of the two stores opened by the Chamber of Mines in Ondjodjo in Ondonga and Omafo in Uukwanyama in 1925. They were the only stores which existed in the reserve and soon became important points of reference for the local society. People who had come into some money and wanted to buy clothing, a plough or just a bag of tobacco walked for several days to reach them. Returning migrant workers spent a large part of their wages in the new shops and took the goods they had bought to the villages to barter for cattle or grain. [...]

This is an excerpt from the book: Traders and Trade in Colonial Ovamboland 1925-1990, by Gregor Dobler.

Traders and Trade in Colonial Ovamboland, 1925-1990 introduces to the history of traders and trading stores in twentieth century northern Namibia.

English Translation of the famous and rare book of Missionary Tönjes, first published in 1911

A Swedish Pioneer in Southern Africa

Contesting Caprivi. A History of Colonial Isolation and Regional Nationalism in Namibia

Contesting Caprivi enhances understanding of the region in North East Namibia to an extent that no previous work has done.

Birth, growth, mature life and witness of the Christian Churches of Namibia since pre-Colonial times, up to the present