This is not a flowerpot, by Amy Schoeman 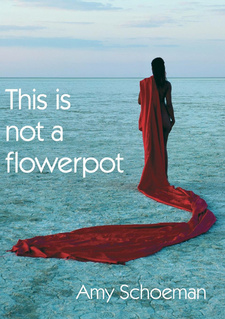 This is not a flowerpot is Amy Schoeman's, who has published several non-fiction books, first book on short stories.

Come over to the fire and warm your hands

I made the appointment with Lionel Littlejohn & Son for the first Monday in March. Although there was much talk of spring, the hyacinths in the two rectangles of garden in front of number 27 were pushing their asparagus-like tips through the black earth, it was still freezing. By the time I'd reached Lincoln's Inn that morning, my eyes were streaming, my ears were aching and my fingers and toes were numb, despite my gloves, wool stockings and I fur-lined boots. The waiting room was a pleasant surprise. It was warm, but not overheated, the chairs were leather, worn and comfortable, and I was the only one there. What was more, the magazines on the table next to me were recent issues, not over two or more years old, like the ones in Dr Sedgeleigh-Denfield's waiting room. Barely three minutes after I'd sat down, the girl behind the desk said, "Mr Littlejohn will see you now." A young man, probably not much older than I was, opened a door. He was tall and thin, with a slight stoop, his hair thick, black and curly and his eyes behind his glasses green and friendly. Smiling, he motioned me to come closer. "Good morning, Mrs O'Connor. I'm Lionel Littlejohn Junior. Do come in." His "Come over to the fire and warm your hands," confirmed that at long last I had come to the right place. The hair-pieced Mr Tomlinson and the Citizen's Advice Bureau belonged to a different world. I blessed Jason for having recommended this firm. Holding my hands out towards the glowing logs, I said, "This is the first time since coming to England that I've seen real wood burning in a fireplace." - "Really?" he answered, walking around to the back of his desk. "How long is it that you've been here?" - "Just over two years," I said, moving away from the fire reluctantly and sitting down on the chair in front of his desk. "I was born here, though. When I was five years old I left with my parents for South Africa." He sat down too. "Are your parents English?" - "Oh, no. They're South African. During the war my father lectured at the London School of Economics and my mother worked for the BBC." - "That's interesting," said Mr Littlejohn, settling back in his chair. "Now, Mrs O'Connor, why don't you tell me what it is you came to see me about?" Suddenly embarrassed, I said in a rush, "A divorce. I want to get a divorce from my husband." - Putting a notepad in front of him, he said, "I see. Well, what we'll do is this. You tell me what grounds you think you have for suing your husband for divorce, and I'll tell you whether I think you have a case or not. Take your time." I felt I had to start from the very beginning, so I told him what had happened, from Edward's threat to arrange for an annulment at the time of our honeymoon, until the evening he'd brought Anja home for supper and had stayed out until the early hours of the morning. Lionel Littlejohn Junior was a good listener, interrupting only now and then to ask a question. While I was talking he made a few notes, but otherwise just nodded, tapping an ornate silver-handled letter opener lightly on a low pile of papers next to his telephone. [...]

This is an excerpt from the book: This is not a flowerpot, by Amy Schoeman.