The Shadow World. Inside the Global Arms trade, by Andrew Feinstein. 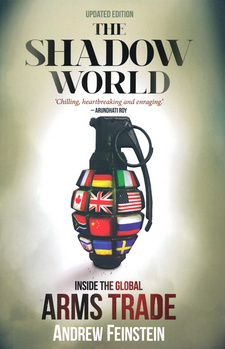 In The Shadow World: Inside the Global Arms trade Andrew Feinstein exposes in forensic detail both the formal government-to-government trade in arms and the shadow world of illicit weapons dealing -and lays bare the inextricable links between the two.

The Prince alighted from his gleaming silver-blue jet, his mind firmly on the task at hand: to persuade his close friend to go to war. Prince Bandar bin Sultan bin Abdul Aziz Al-Saud, Saudi Arabia's ambassador to Washington, was in Crawford, Texas, in August 2002 to visit the President of the United States, his close friend George W. Bush. At the President's ranch the two men, comfortable in one another's company, chatted for an hour. The President was in determined mood. Bandar's exhortation that he should not back off, that he should complete what his father had failed to do, that he should destroy the regime of Saddam Hussein once and for all, gratified the President. Satisfied by their mutual reinforcement, the dapper enigmatic Prince and the cowboy President took lunch with their wives and seven of Bandar's eight children. A few weeks later, President Bush met the British Prime Minister, Tony Blair, at Camp David. The two leaders declared they had sufficient evidence that Iraq was developing weapons of mass destruction to justify their acting against Saddam, with or without the support of the United Nations. Prince Bandar's role in Washington and London was unique: diplomat, peacemaker, bagman for covert CIA operations and arms dealer extraordinaire. He constructed a special relationship between Washington, Riyadh and London, and made himself very, very wealthy in the process. The £75 Million Airbus, painted in the colours of the Prince's beloved Dallas Cowboys, was a gift from the British arms company BAE Systems. It was a token of gratitude for the Prince's role, as son of the country's Defence Minister, in the biggest arms deal the world has seen. The Al Yamamah - 'the dove' - deal signed between the United Kingdom and Saudi Arabia in 1985 was worth over £40 Billion. It was also arguably the most corrupt transaction in trading history. Over £1 Billion was paid into accounts controlled by Bandar. The Airbus - maintained and operated by BAE at least until 2007- was a little extra, presented to Bandar on his birthday in 1988. A significant portion of the more than £1 Billion was paid into personal and Saudi embassy accounts at the venerable Riggs Bank opposite the White House on Pennsylvania Avenue, Washington DC. The bank of choice for Presidents, ambassadors and embassies had close ties to the CIA, with several bank officers holding full agency security clearance. Jonathan Bush, uncle of the President, was a senior executive of the bank at the time. But Riggs and the White House were stunned by the revelation that from 1999 money had inadvertently flowed from the account of Prince Bandar's wife to two of the fifteen Saudis among the 9/11 hijackers. On the night of 4 August 2000, police barged into Room 341 of a tawdry hotel in Cinisello Balsamo, a nondescript working-class town in northern Italy, just outside Milan. There they found a pale, fleshy 53-year-old man lying amidst a jumble of bedclothes and underwear, a pornographic film flickering on the wall in the background. He was surrounded by four prostitutes: Russian, Albanian, Kenyan and Italian. Cocaine littered the floor, together with half a million dollars' worth of diamonds. [...]

The Shadow World. Inside the Global Arms trade, by Andrew Feinstein.