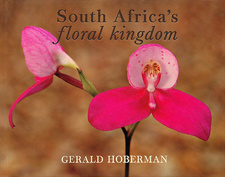 A rare occasion has brought together Dr. John Manning, a worldwide reknown botanist and Capetonian and photographer Gerald Hoberman (1943-2013) to collaborte for this little project on South Africa's Floral Kingdom.

Fynbos, the characteristic heathland vegetation of the south-western Cape, is dominated by small-leaved, evergreen shrublets. Its name derives from the Dutch term meaning literally fine or delicate shrubbery, and was applied rather derisively by early Dutch woodsmen in the southern Cape to any sort of small woodland growth devoid of the timber trees that were so highly valued at the time. Fynbos is adapted to life on soils that are poor in the nutrients necessary for plant growth, and is the dominant vegetation on the highly leached sandstone and quartzite slopes of the Cape Fold Mountains, and on the porous sand and limestone flats at their feet. Regular recycling of these precious nutrients is essential for fynbos survival. Fire is the motor that drives this cycle by releasing nutrients back into the soil for reuse. Many fynbos plants have developed ingenious strategies to survive the periodic fires that sweep through the region in the dry summer months, fanned by driving winds and devouring the tinder-dry shrubbery. The rather monotonous appearance of fynbos belies the extraordinary diversity of plant species for which it is famous. Fynbos, by some measures, is the most diverse vegetation type in the world, surpassing even the richest tropical rainforests in the number of species found across its range. Proteas, ericas, restios, small-leaved members of the orange and other families, large numbers of colourful bulbs, and a great variety of other plants, some 9 000 species in all, jostle for a place in the sun in the richest floral region in the world. Proteas are one of the characteristic constituents of fynbos vegetation. Members of an ancient family that was once widespread across the southern continents, proteas and their relatives are today best represented in the heathlands of South Africa and Australia. Their small florets, individually unattractive, are accumulated in large heads that resemble giant pincushions in Leucospermum species but which, in Protea species, are surrounded by enlarged, colourful leaves or bracts that advertise the presence of nectar within the flower heads. Many proteas and pincushions, including the Overberg, ribbon and rocket pincushions, are among the more than 400 fynbos species that rely on nectar-feeding sunbirds and sugarbirds for pollination and seed development. The bird-pollinated members of the protea family produce among the largest and most brightly coloured flowerheads of all fynbos plants, and the largest among them, the King Protea, has been adopted as the national flower of South Africa's Cape sugarbirds, in turn, depend on proteas and pincushions for both food and shelter. These gregarious, inquisitive birds are found wherever stands of proteas occur. The silver tree {Leucadendron argenteum) is one of the most iconic members of the protea family. These stately trees, which are restricted to damp granitic soils and were never common, were felled for firewood by early settlers around Cape Town. Today their shimmering colonnades are seen only on the slopes of Lion's Head and Devil's Peak on the Cape Peninsula, and on Paarl Mountain and the Helderberg across the Cape Flats. Like all Leucadendron species, male and female flower heads are borne on separate plants, with small flowers arranged in the tight cones that give them their common name, conebushes. The cones of the peninsula conebush are surrounded by enlarged, brightly coloured leaves that attract pollinating insects. The seeds of the silvet tree, like those of several others species, remain in the cones, where they are protected from predators by hard, woody scales until the plant is killed by fire, when the scales open to release the seeds onto the scorched earth, which has been cleared of competing plants and is richly fertilised by the ash of burned vegetation. [...]

This is an excerpt from the book: South Africa's Floral Kingdom (Hoberman), by Gerald Hoberman and John Manning.