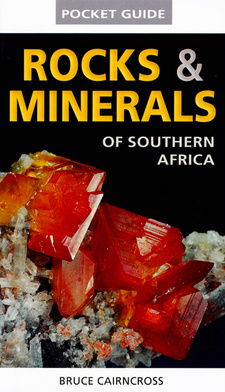 Introduction: Southern Africa is endowed with a wealth of mineral deposits, as well as several internationally famous geological formations and world heritage sites. The region's geological history spans an enormous time period, with some of its rocks being over 3 000 million years old. All of the three important rock types - igneous, metamorphic and sedimentary - occur here. They are composed of many different mineral species, ranging from those that are somewhat dull to those with chemical or aesthetic properties that make them useful in industry, in building or as gems or collector specimens. Currently over 4 400 mineral species are known worldwide, many of which are found in southern Africa. This book features the more common, interesting or important rock and mineral types and is intended to provide a quick and easy field reference for amateur geologists and collectors. If you wish to learn more about the distribution or characteristics of rare minerals, the bibliography lists easily accessible professional publications dealing in greater detail with the geology of southern Africa.

Minerals: A mineral is a naturally occurring inorganic solid, consisting either of a single element or a mixture of elements. All minerals have formal scientific names that have to be approved by the International Mineralogical Association (IMA), which formulates rules and guidelines for naming minerals. However, there are also unofficial common, informal names used by the trade or by amateurs, e.g. 'Cape ruby' for 'pyrope garnet'. This applies to both minerals and rocks. It is best to use the scientific names wherever possible to limit confusion.

Gemstones are a special category of minerals and are defined by three criteria: beauty, durability and rarity. With the exception of pearl and coral, which are organic gems, all other gemstones are naturally occurring minerals or rocks. The terms 'precious' and 'semiprecious' have historically been used to describe gems. Precious traditionally refers to diamond, ruby, emerald, sapphire and pearl, and sometimes opal and alexandrite. Semiprecious refers to all other gems, e.g. aquamarine, tiger's eye, topaz, tourmaline, amethyst and stones that are not as rare or expensive as the precious group. However, this subdivision is discouraged and the term gemstones is now more acceptable for both categories. Gemstones are hosted in all three major types of rock and most gemstones are relatively rare. Knowing which gemstones are associated with which rock type helps prospectors to discover gemstone deposits. Nowadays, synthetic gemstones grown in a laboratory are becoming increasingly common in the market. Often they are equal in quality to the natural gemstones, but cheaper. Traditionally, the following gemstones are associated with the months of the year:

Rocks: A rock is composed of a combination of minerals. Some rocks can have many mineral components, while others may consist of only a few minerals. To distinguish between different types of rocks, first the minerals that comprise them have to be studied and identified. Fortunately, the suite of rock-forming minerals is relatively small, so this identification process is not too arduous. As already mentioned, all rocks can be classified into three major groups - igneous, sedimentary and metamorphic. These three categories are described in detail in the section.

Identifying minerals & rocks: It requires patience, practice and wide reading to become expert at identifying rocks and minerals. While many of the common species display distinctive forms, others occur in a confusing variety of habits and colours. Quartz, for instance, is probably the most common mineral on Earth, yet it can prove frustrating to distinguish from other similar-looking species. However, certain fundamental physical properties are listed in this book as a quantitative way of helping to identify mineral samples. These properties include colour, streak, lustre, transparency and translucency, form or habit, cleavage, tenacity, specific gravity and hardness, each of which is explained below. In the case of rocks, characteristics such as the size of the mineral grains, texture and, sometimes, colour can provide valuable clues.

Description: A common metamorphic mineral in slates and schists, forming elongate pencil-like red-brown to tan crystals. It forms under relatively low crustal pressure and temperature. A variety of andalusite, chiastolite, contains carbonaceous inclusions in the form of an 'X' that can be seen when the mineral is cut in cross-section.

Uses: It is used in the manufacture of refractory products and in the ceramics industry. Aluminium - a lightweight metal used in the aircraft and aerospace industry - is extracted from it. Aluminium also has applications as an anticorrosive agent.

South Africa NC: Found in pegmatites near Kakamas, Mottelsrivier and Bokvasmaak. LIM/MP: Large deposits occur around Thabazimbi, Chuniespoort, Penge and Lydenburg. NW: Good deposits also found at Groot Marico and Zeerust in the Marico district. FS: Andalusite occurs in the metamorphic rocks surrounding Parys and Vredefort. Namibia: Common in schists southwest of Okahandja, and in the Kuiseb River Valley. Botswana: Found in the eastern districts. Zimbabwe: Schist and gneiss north of Mtoko and in the Mwami and Masvingo districts contain andalusite. Chiastolite crystals occur in the Hurungwe and Mwami districts. Swaziland: Deposits found in pyrophyllite schists near Sicunusa (which were mined as a source of aluminium).

This is an extract from the Pocket Guide Rocks & Minerals of Southern Africa, by Bruce Cairncross.

From the series Pocket Guide this is Rocks & Minerals of Southern Africa.

First Field Guide to Rocks and Minerals of Southern Africa

This First Field Guide introduces the most important and interesting rocks and minerals of Southern Africa.

This little guides from the series First Field Guide is a good resource for beginners on gemstones of Southern Africa.

Field Guide to Rocks and Minerals of Southern Africa