Photo Guide to the Wildflowers of South Africa, by John Manning 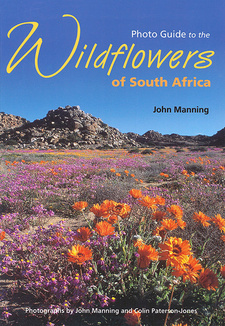 John Manning's photo guide covers nearly 900 of the most common and conspicuous wildflowers that occur in South Africa and the neighbouring countries. The choice of species is the result of many years' experience in the field by the author.

The natural vegetation of southern Africa can be divided into seven broad classes based on the dominant types of plants that occur in them, including such groups as trees, grasses and other herbaceous perennials, or annual herbs. The classes are termed biomes and each is defined by the dominant lifestyle found among its component plants. These lifestyles are a direct response to climatic factors, especially the average annual rainfall, the season in which most of it falls and the degree of summer aridity. The biomes are defined, therefore, on the structure of the vegetation rather than on the identity of the individual species. No less than eight different biomes occur in South Africa alone (although the Desert Biome is largely restricted to the Namibian coast and enters South Africa only along the lower reaches of the Orange, or Gariep, River). The large number of biomes that occur in South Africa is a reflection of the great variation in climate that occurs across the country. Climate is the prime determinant for the diversity of wildflowers that characterise a region and is, in turn, determined by its geography, latitude (and therefore the weather systems associated with it), and the ocean currents that pass along its coasts. The eastern and western shores of southern Africa are washed by two very different currents, with dissimilar effects on their rainfall. In the east the Agulhas current flows southwards, bringing warm tropical water with it and raising the humidity of the air above it to levels that sustain the lush, subtropical vegetation that characterises the eastern seaboard. The west coast, in sharp contrast, is an arid desert, the result of the cold Benguela current that sweeps northwards from the southern polar region, lowering the humidity and reducing rainfall. Here the vegetation is dominated by a dwarf succulent shrubland. Between these two different coasts is the central plateau, which supports temperate grassland in the east and a semi-arid scrubland in the west. This plateau drops dramatically along the Drakensberg to the coastal plain in the east; to the west it slopes gently and then drops gradually to the coast. To the south the coastal forelands have been folded into the parallel ranges of sandstone rock that form the towering ramparts of the Cape Fold mountains, which are the bastion of fynbos shrubland. Compounding the differences in the coastal currents is the influence of two distinct weather systems. The bulk of the country comes under the sway of a tropical high-pressure system that prevents warm, moisture-laden air from the Indian Ocean reaching the interior in winter. The result is that the central and eastern parts of the country receive the bulk of their rain during the summer months, in the form of thunderstorms and showers carried from the Indian Ocean by north-easterly winds. In contrast, the south-western part of the country receives the bulk of its rain in winter, when it comes under the influence of a low-pressure system that moves north at this time of the year. From April to September westerly winds drive a series of cold fronts across the southern part of the country, depositing rain in their wake. Sandwiched between these two regions is a narrow band that receives relatively little rain throughout the year. South Africa's biomes are the result of the interplay between these geographical and climatological influences.

This is an excerpt from the guide: Photo Guide to the Wildflowers of South Africa, by John Manning.