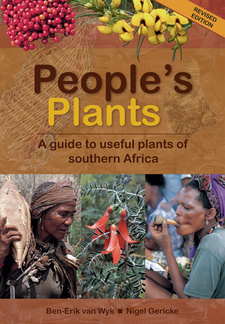 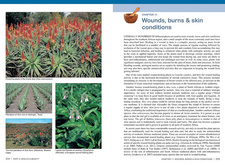 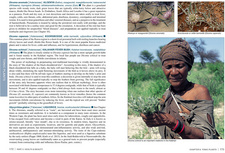 With their book, People’s Plants: A Guide to Useful Plants of Southern Africa, Ben-Erik van Wyk and Nigel Gericke hope to stimulate ongoing scientific documentation of indigenous knowledge for future generations, and most importantly, the application and beneficiation of this knowledge as instruments for sustainable development in Southern Africa.

Southern African has a diverse and interesting indigenous tea, wine and beer culture. The terms tea, wine and beer are not accurate and may even be misleading, because they imply a relation with the three main beverage plants of the modern world (Thea sinensis - tea, Vitis vinifera - wine, Hordeum vulgare - barley malt used for beer). Traditional drinks in southern Africa are often highly nutritious and form an important component of the diet. The diversity of alcoholic and non-alcoholic beverages is highlighted below. One of the most widely used beverages in southern Africa is sorghum beer, produced from Sorghum bicolor malt. Beer-making has become commercialised and standardised, so that the rural recipes and special ingredients are no longer used except in isolated places. The most important traditional "beer plants" such as pearl millet (Pennisetum glaucum) and marula (Sclerocarya birred) are no longer as widely used as in former times. Malted beers are traditionally used daily as an item of diet. Marula and other fruit brews, however, are strictly seasonal, and are used mainly for their alcohol content, to lift the spirit. A glimpse of the diversity can be seen in the study of Quin (1959) who recorded the main traditional beers (bjalwa) of the Pedi culture. With increasing awareness and appreciation for the value of diversity, there will hopefully be a revival of the traditional art of brewing, so that more people will be able to appreciate the diversity of tastes in future. The traditional malting and brewing methods for bjalwa were recorded in detail by Quin (1959). Malting procedures are the same for sorghum, pearl millet and even non-traditional mealies: the grain is placed in a clay pot and submerged in cold water. After 24 hours, when the grain starts to sprout, it is drained and transferred to a grass basket. After a further 24 hours, the sprouts reach a length of about five millimetres and the process is allowed to continue until the roots are about 25 millimetres long. The mass of germinated grain is spread and allowed to dry in the sun. The dry product is ground on a grinding stone to make a coarse meal. The brewing procedure described here is for traditional sorghum beer (Quin 1959): lukewarm water is added to the malted meal in a special clay pot, the content is stirred well and then covered with a small basket as a lid. After a day of fermentation, the supernatant liquor is transferred to an open cooking pot, brought to the boil (to reduce acidity) and the fermented mash, thinned with water, is returned to the liquor, while stirring continuously. After boiling for half an hour, the pot is left to simmer for another hour. The original clay pot is rinsed with cold water and the cooked gruel is transferred back into the pot and stored in a cool place. After 12 hours the brew forms a gelatinous mass without any fermentation. More malted meal is added and the whole brew is stirred and left to ferment for 10 hours at room temperature. The brew is now ladled into a grass strainer and the beer is wrung into a clay pot, ready for serving. Another important beverage is palm wine, prepared from the sap of the ilala palm (Hyphaene coriacea) and the mokola palm {H. petersiana), and to a lesser extent also the wild date palm {Phoenix reclinata). Details are given below. In the dry parts of southern Africa, karrie or mead (honey beer) was once an important beverage. Interesting regional differences in the source materials and in the methods used, have been recorded. This is certainly a dying art, perhaps because wine and other alcoholic beverages have become readily available as alternatives to the traditional brews.[...]

This is an excerpt from People’s Plants: A Guide to Useful Plants of Southern Africa, by Ben-Erik van Wyk and Nigel Gericke.