The Origin and history of the Oruuano Church in Namibia, by Ehrenfried Kandovazu 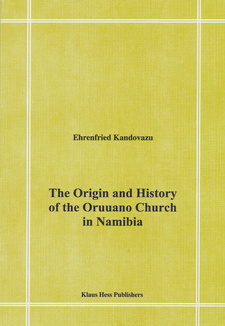 The Origin and history of the Oruuano Church in Namibia by late Ehrenfried Kandovazu is an inheritance which can be written further and told in detail for the sake of posterity. This booklet will be a light to many readers to see in the past of Namibia as well as in the future.

Johanna Kahatjipara translated Ehrenfried Kandovazu's text from Otjiherero. The emergence of the Oruuano Church was because of a strong desire of the Ovaherero people in their quest to reclaim their identity that was stripped off by their losing of the Ovaherero-German war in 1904. This made them become prisoners of war and subsequently converted to Christianity by the German Missionaries. It was not an easy exercise by the Ovaherero to form their own church. However, their resilience to want to start their own church and their political will and spirit of liberation was worth being documented by Ehrenfried Kandovazu. It is fortunate that this documentation was written by someone who was present as the events were unfolding and who knew and comprehended the depth and secret nature of the Ovaherero philosophy i.e., their beliefs, customs and thought patterns. Even though Ehrenfried Kandovazu realized the need of assistance by the white pastors, he expressed his desire for the independence of the black pastors in the Evangelical Lutheran Church so as to use their own discretion rather than being dictated to by the white pastors. He was of the opinion that the black pastors were more befitted to evangelize to their own people as they understood the depth and thinking of the Ovaherero people.

In 1965 Dr Theo Sundermeier of the United Lutheran Theological Seminary at Otjimbingue requested me to participate in the "sect movements writing competition" of South and Southwest Africa, which was organized by the Lutheran Theological College in Mapumulo. I had only three months time to prepare for this writing competition. It was a great surprise to me when the judges of the College not only approved of my essay, but also awarded me the first prize. I therefore cannot refrain from mentioning my colleague and friend, Dr Julius Baumann for providing me with information written in German. The Church Management of the Evangelical Lutheran Church in SWA (Rhenish Mission Church) requested me to adapt the information about this historical event in our church as a booklet for our Afrikaans speaking colleagues.

[...] The emergence of the Oruuano Church was not due to theological teaching, but, as it happens amongst many sects, it stemmed from questioning the church and also the desire for a steadfast nation. The people started to dislike the church, and pointed out its shortcomings. Many refused to subject themselves to the appropriate church conduct, especially where it required discipline. Many wanted a division, as expressed in Latin "secare" which means "to cut" or to "divide". As the Oruuano Church divided or cut itself from the church, it became easy to change the meaning of the Word of God. The Old Testament is believed to be superior, as it contains information that, when misinterpreted, resembles heathen beliefs such as circumcision, offerings, polygamy and death rituals. The slavery of being bound to the law of the Old Testament is revived in this way. As many Christians who were baptized still believed in idols, (because many of them do not attend church), it has become easy to fall and to return to heathenism. When we take an in-depth look at the Oruuano Church, we should ask what the belief was during the time of heathenism. [...]

This is an excerpt from: The Origin and history of the Oruuano Church in Namibia, by Ehrenfried Kandovazu.

The Origin and history of the Oruuano Church in Namibia