Notes on Nature, by Amy Schoeman 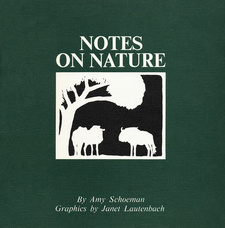 Notes on Nature by Amy Schoeman will deal not only with subjects for their interest value, but also with controver sial issues, in an attempt to create greater awareness of nature and its conservation in South West Africa.

These three plants, especially the Windhoek aloe and kokerboom, are very typical of SWA, and much sought after by collectors and gardeners. They are illustrated in the composite linocut on the next page and will be discussed in the same order. One of the commonest types of aloe (all told there are 25 known species in SWA, the majority of which occur in the winter rainfall zone of the Luderitz district), is the extremely picturesque Aloe littoralis, commonly referred to as the mountain or Windhoek aloe, the latter because it is used in Windhoek's emblem. Despite its name this aloe grows almost everywhere in SWA, except in the far south and those areas where the annual rainfall is less than 50 mm. Flowering times differ depending on the region, and the colour of the small tubular-shaped flowers varies from dark to light red and even yellow. These aloes tend to grow individually and are sometimes up to 4 metres tall, their striking silhouettes are frequently put to good use by artists and photographers. Some of our nature conservators have observed kudu and baboons eating aloe leaves, mainly when food is scarce, which just goes to show how tough their constitutions must be. Did your mother ever paint your thumb with Aloe Bitters to stop you from sucking it? Mine did ... A truly curious plant which is in great demand by collectors is the cactus-like elephant's trunk (halfmens) Pachypodium namaquanum. In SWA they grow only in the south, on the banks of the Orange River and west of Onseepkans, especially in the vicinity of Rosh Pinah. The soft fibrous pithy stem is covered by a thick tough skin and long spiky thorns. For ten to eleven months of the year and in times of drought the elephant's trunk withdraws into a state of suspended animation. Shortly after it has rained, however, green velvety leaves appear on the crown, followed in June to August by striking red-lipped yellow flowers. The Afrikaans name 'halfmens' is derived from an old Nama legend which has it that a group of Namas fleeing from their enemies across the Orange River not making much headway were mercifully I changed into plants by their gods, their heads facing northwards towards the foe. The elephant's trunk is in fact positive phototropical, that is facing the sun, which for them is north. Talking about facing the sun, if you are camera-inclined and living in this country, you're in clover. Who could ask for a more photoworthy subject than that evergreen classic, the kokerboom, etched in black, sculpturesque against the deep absorbent red of a Namibian sunset? The quiver tree (kokerboom), of which there are three species in SWA, belongs to the aloes. The commonest of these is the Aloe dichotoma, which occurs mainly in the western regions of SWA, from the Orange River up to the Brandberg in the north. Twenty-three km north-east of Keetmanshoop on the farm Gariganus is a dense stand of these trees, known as the Quiver Tree Forest (Kokerboomwoud). Twenty years ago the then owner of the farm Mr Friedel Mann-heimer liaised with the authorities, it was proclaimed a natural monument and fenced off for tourist viewing. Since then virtually all the young trees have been dug out by members of the public. [...]

This is an excerpt from Notes on Nature, by Amy Schoeman.