Mind-altering and poisonous plants of the world, by Michael Wink and Ben-Erik van Wyk 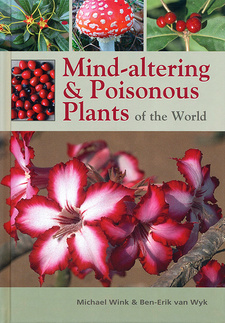 Michael Wink and Ben-Erik van Wyk have presented this excellent reference book including great photography for for those interested in learning more about the mind-altering and poisonous plants plants of the world.

Why do poisons and mind-altering substances exist in nature?

Plants, fungi and non-mobile invertebrates cannot run away when attacked by enemies such as herbivores or predators, nor do they have an immune system against attacking bacteria, fungi or viruses (which humans have as a defence system). Plants and other sessile organisms (such as marine animals) have developed various biologically active chemicals during evolution that help them to defend themselves against predators (insects, molluscs, vertebrates), microbes, viruses and competing other plants. Some animals, such as spiders or snakes, use poisons for both defence and prey acquisition; these poisons often consist of toxic polypeptides (enzymes, ion channel modulators) and neurotransmitters. Mind-altering compounds appear to be an exception at first glance, since they make the consumer dependent and thus the)' would feed even more on a given plant. But mind-altering secondary metabolites (SMs) also function as defence compounds: If a herbivore becomes intoxicated and "high" it is no longer alert and becomes unable to watch its surroundings. The likelihood is high that it will fall out of trees or from rocks or be killed by predators. Furthermore, most psychoactive compounds are deadly poisons at higher doses. Since animals cannot determine the dose, the chance of a lethal poisoning is quite high. Therefore, the production of attractive mind-altering substances is another trick of plants to get rid of herbivores. Whereas primary metabolites are present in all species and are essential for life, secondary metabolites (SMs) occur in varying mixtures that differ between species and systematic units. Because some SMs are typical for specific plant groups, scientists have used them as taxonomic markers ("chemotaxonomy"). SMs are not essential for primary or energy metabolism but are important tor the ecological fitness and survival of the organisms producing them. SMs are adaptive traits and their occurrence in plants reflects common descent as well as environmental selection. In order to be effective, SMs need to be present at the right site, time and concentration in the plant producing them. This means that biosynthesis, transport, storage and even turnover must be highly regulated and coordinated processes. The biosynthesis of several SMs is usually constitutive whereas in many plants the synthesis can be induced and enhanced bv biological stress conditions, such as wounding or infection. This activation can be biochemical, e.g. through hydrolysis of glycosides that are stored as "prodrugs" (Table p. 14) or via the activation of genes responsible for synthesis, transport or storage of the SM. Signal transduction pathways that cause gene activation in plants include the pathway leading to jasmonic acid or salicylic acid that have been found to trigger defence reactions in plants. Defence chemicals arc usually stored in tissues that are important for survival and reproduction (such as fruits and seeds); very often they are located in strategically advantageous sites, such as epidermal or bark tissues. For these reasons, seeds often represent the most toxic part of a plant. Whereas hvdrophilic compounds are preferably stored in vacuoles, lipophilic SMs are stored in resin ducts, lacticifers, oil cells, trichomes or in the cuticle. The site of storage need not be identical to the site of biosynthesis. Therefore, long-distance transport via xylcm or phloem is a regular theme in secondary metabolism. [...]

This is an excerpt from the book: Mind-altering and poisonous plants of the world, by Michael Wink and Ben-Erik van Wyk.