Mesembs of the World, by Gideon F. Smith et al. 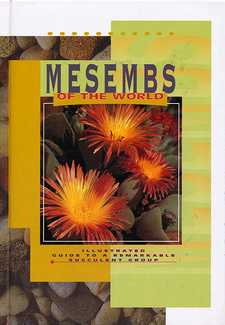 Mesembs occur mainly in the southwestern parts of the African continent, from Angola down to the Cape, extending well into the east over the central plateau of South Africa and reaching into Zimbabwe and Botswana. Nine experts for mesembs of the world have contributeted to chapters like the following.

Mesembs occur mainly in the southwestern parts of the African continent, from Angola down to the Cape, extending well into the east over the central plateau of South Africa and reaching into Zimbabwe and Botswana. The highest number of species and genera is found in the mountainous area of the Richtersveld in the Northern Cape Province: about 30 genera are counted in that small region. The number of genera decreases towards the east, and hitherto only seven genera have been recorded from Lesotho. Outside this core area, several species of Delosperma are found from northern Tanzania up to the Yemen and also in Arabia and Madagascar. A few species of Mesembryanthemum occur around the Mediterranean Sea, and most species of the genus Disphyma are found in Australia, New Zealand and the adjacent islands. The genus Sarcozona and some species of Carpobrotus are restricted to Australia, but species of Ruschia and Lampranthus may not be indigenous to Australasia. It is also not clear whether species of Malephora and Carpobrotus are recent introductions to South America, but the populations of Carpobrotus found along the west coast of North America were certainly introduced by man. Winter rains dominate in the greatest part of all the distribution areas mentioned above, and plants react by forming their leaves and flowers mostly during that period. Fruits are generally developed towards or in the dry summer season, the seeds being ready for dispersal at the beginning of the next rainy period. Only a limited number of genera, such as Delosperma and Khadia, is well adapted to summer rains, but Trichodiadema and spiny members of Ruschia rapidly grow shoots after rains, regardless of the season. Although the soils on which mesembs are found differ greatly, for most genera they can be described as rather sandy-gravel and well drained. Mesembs often dominate on gravelly plains, for example the Knersvlakte, but they may also be found in broken rocky places. In these habitats, shrubs like Stoeberia may settle in crevices amongst the rocks. Only a few genera, for example Khadia and Ebracteola, prefer humus, and equally few settle in flood plains, for example Nananthus and Mestoklema. Only a restricted number of species from some genera can be classified as pioneers or weeds, for example some in the genera Psilocaulon and Malephora, and a few in the genera Cephalophylium and Leipoldtia. In the core areas, temperatures are generally rather low during winter, meaning that the main growing season corresponds with moderate, wet conditions. The dry, hot summer months are survived in a resting state. Mitrophyllum and many other genera are so strictly adapted to seasonal changes of heat and moisture that they grow themselves to death when permanently kept in moist conditions. As a rule, pollination is performed by insects, which are attracted by the mostly brightly coloured petals. The flowers open either during the day, in the afternoon or at night. Bees collect nectar from day-flowering species, for example those of Psilocaulon. Dispersal of seeds in most genera is closely related to the opening of the capsule through moisture: expanding keels lift the valve when moistened, and in most cases raindrops expel the seeds from the locules. This process is triggered by rain, when conditions for germination and the establishment of seedlings are favourable. In a number of genera the capsules break off from their stalks and are dispersed by wind as tumble fruits. The dispersal of fruits by animals has only been observed in a few species. Nuts and dry fruits are rare. [...]

This is an excerpt from the book: Mesembs of the World, by Gideon F. Smith et al.

Waterwise Gardening in South Africa and Namibia is aimed at anyone who wants to create a new garden or convert an existing one to waterwise principles.

This major work on the southern African Plectranthus, surveys the discovery and naming of this beautiful plants and includes an account of the author's own travels in search of them.