Medicinal Plants of the World, by Ben-Erik van Wyk and Michael Wink 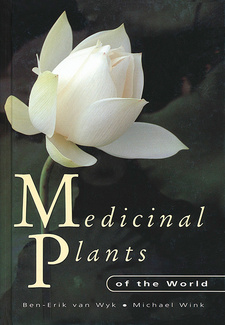 Ben-Erik van Wyk and Michael Wink hope that this book will be found useful as a quick reference guide to medicinal plants of the world and that it will stimulate and inspire health care practitioners, students and anyone else interested in medicinal plants to find out more about this fascinating subject.

Medicinal plants and plant-derived medicine are widely used in traditional cultures all over the world and they are becoming increasingly popular in modern society as natural alternatives to synthetic chemicals. As more and more natural remedies are being commercialised, there is a need for a user-friendly but scientifically accurate reference guide to the plants and their products. This book is a photographic guide to the most commonly used and best known medicinal plants of the world, including their botany, main traditional uses, active ingredients, pharmacological effects and evidence of efficacy (if known). The biological activity of many medicinal plants has become known through scientific research and any literature search (via the Internet, for example), would reveal that numerous new publications are added to the scientific literature every day. There is simply no space to allow for a comprehensive literature list for the more than 320 plants and their relatives treated and illustrated in this book. The reader can consult the list of Further Reading (p. 442) for further information. Natural products and their derivatives (including antibiotics) represent more than 50% of all drugs in clinical use in the world. Higher plants contribute no less rhan 25% to the total. Well-known examples of plant-derived medicines include quinine, morphine, codeine, colchicine, atropine, reserpine and digoxin. Recently, important new anticancer drugs such as taxol and vincristine have been developed from plants. Health shops and pharmacies all over the world are experiencing a rapidly growing interest in healthy living, self-medication and natural remedies. The international consumer market for herbs and boranicals alone is estimated at about US$ 18 billion, which is just under half of the total market for supplements (including vitamins, minerals, homoeopathic products and sports supplements), estimated at more than US$ 50 billion. How do medicinal plants work? An overview of the various active ingredients (secondary metabolites, p, 371) is provided in an attempt to clarify the complexity of metabolic effects caused by medicinal plants. Phytomedicines often contain a mixture of substances that have additive or even synergistic effects, so that the health benefits are difficult to test and verify. Plant medicine or phytomedicine may have subtle effecrs on several different biochemical pathways and receptors in the body-mind continuum that may all contribute directly and indirectly to restore equilibrium and balance. It is hard to dismiss medical claims of safety and efficacy when a plant medicine has been used in traditional cultures for centuries without evidence of serious side effects. Research results generated over the last few decades have given us a much better understanding of the scientific rationale behind many natural remedies. A section is also included on the various health conditions (p. 351) that are treated with medicinal plants. In traditional cultures, plant products are used in combination with psychological treatmenrs in an integrated, holistic approach to primary health care. The psychological part of the treatment often takes the form of magical, ritual, spiritual or symbolic practices that are difficult to understand when taken out of their cultural contexts. Our modern formulations, too, can deviate quite often from the traditional form. The use of alcoholic extracts (tinctures) instead of traditional watery extracts (infusions) for example, may result in ineffective treatment or even harmful side effects. As with all medicine, the correct dosage form and desirable level (s) of active ingredients are key elements in treating ailments or disorders and maintaining health. A checklist of commercial medicinal plants is provided (p. 395), giving the correct scientific name, common name(s), family, origin, main compounds, main actions and main uses of more rhan 900 medicinal plants. To further enhance the general utility of the book, a glossary of medical terms (p. 433) is provided. [...]

This is an excerpt from the book: Medicinal Plants of the World, by Ben-Erik van Wyk and Michael Wink.