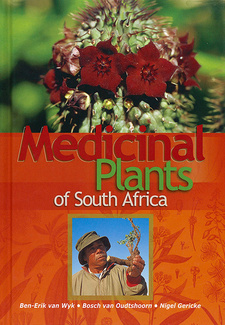 Despite considerable efforts over the last decade, there is still a lack of detailed documentation on the use of many of the medicinal plants in South Africa. This is an urgent priority in view of the fragility of oral-tradition knowledge, and the rapid pace of urbanisation and acculturation in this country. Ben-Erik van Wyk, Bosch van Oudtshoorn and Nigel Gericke believe that with official support, formal documentation, research and systematisation, the beneficial practices of Africa's indigenous systems of medicine will one day claim their rightful place among the great healing traditions of the world.

South Africa is blessed with a rich cultural diversity which is reflected in the formal and informal systems of medicine that are presently practised in different parts of the country. The informal oral-tradition medical systems of the Khoi-San peoples, the Nguni and the Sotho-speaking peoples have not yet been svstematised, and are passed on by word of mouth from one generation to the next. These medical systems and their herbal, animal and mineral materia medica have ancient origins which may date back to palaeolithic times. The formal systems of medicine, which are well documented and svstematised, were introduced to the country over the last three hundred years by European and other settlers, and are exemplified by today's modern Western medicine, also called Western biomedicine or allopathic medicine. Ayurvedic medicine from India, Traditional Chinese Medicine and homoeopathic medicine are also commonly practised in South Africa.

Each system of medicine is the art and science of diagnosing the cause of disease, treating diseases, and maintaining health in the broadest sense of physical, spiritual, social and psychological well-being. Each culture has found solutions to the preventive, promotive and curative aspects of health that resonate in harmony with the world view of that culture. Western medicine may diagnose a disease in terms of a bacterial infection, for example, and treat that infection effectively with antibiotics. An African traditional healer will seek to understand why the patient became ill in the first place, and the treatment administered will address the perceived cause, usually in addition to specific therapies to alleviate the signs and symptoms of the condition.

There are an estimated 200 000 indigenous traditional healers in South Africa, and up to 60% of South Africans consult these healers, usually in addition to using modern biomedical services. Traditional healers in South Africa are most commonly known as "inyanga" and "isangoma" (Zulu; plural: "izinyanga" and "izangoma"), "ixwele" and "amaquira" (Xhosa), "nqaka" (Sotho), "bossiedokter" and "kruiedokter" (Western and Northern Cape). The terms "inyanga" and "san-goma" used to refer exclusively to herbalist and diviner respectively, but in modern times the distinction has become blurred, with some healers practising both arts. In addition to the herbalists and diviners who are believed to be spiritually empowered, there are traditional birth attendants, prophets, spiritual healers (Zulu: "abathandazi"), spirit mediums, intuitives and dreamers. Most elderly folk in rural areas have a knowledge of herbal lore, and function as first-aid healers with a family repertoire of herbal remedies or "kruierate".

Indigenous systems of medicine are dynamic and adaptive, although firmly rooted in the traditions of the past. This can be seen in the incorporation ot introduced medicinal herbs such as liquorice root (Glycyrrhiza glabra; Zulu: "mlomo-mnandi") and calamus root (Acorns calamus; Zulu: "ikalarmm") into the materia medica, the use of modern medicines by some indigenous healers, and the keen interest in modern Primary Health are training programmes expressed by modern traditional healers' associations. This dynamism suggests that with appropriate official support and recognition, traditional medicine will survive well into the next century, strengthened by modern science, not subsumed by it. [...]

This is an excerpt from the guide: Medicinal Plants of South Africa, by Ben-Erik van Wyk, Bosch van Oudtshoorn and Nigel Gericke.