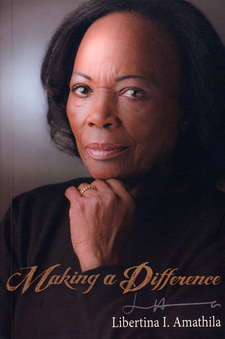 (...) One bright morning in May 1989, a few months after the walkie-talkie affair, I was informed that we should pack our belongings because we were about to be repatriated to Namibia to take part in the elections. I remember I was so engulfed in my work that I didn't feel all that enthusiastic about the news. I had a nice little house and a flourishing garden. I was running my nursing school successfully, and the nutrition classes. These were my two main projects and I didn't want to interrupt them. I knew where I was, but I didn't know where I was going. Anyway, we had to pack our containers. We were only allowed to take 20 kilos of luggage with us on the plane, so all of my nursing school texts, equipment and other books and property went into that container. I was sorry to leave the prefab buildings, my house and my vegetables behind. It's not strange that I felt that way, because I was weary of moving from centre to centre; every time I put down roots I had to move. I had been on the move for my 27 years of exile. I was not impressed with the news that we were moving again, but I had to go. We left Luanda on 18 June 1989. I was on the first plane with the leadership group that came back to Namibia with the clear and specific mandate to set up an election team and organize our campaign. Comrade Hage Geingob was appointed by the SWAPO Political Bureau to be the Director of the SWAPO election campaign and he was the leader of the delegation. My responsibilities were in health and social issues. Most of us who were later to form the first Cabinet in an independent Namibia were in that plane. What a risk we took, but we had no choice. It makes me shiver when I think of it even now. I knew that if something happened we would all be goners but I prayed that if that was to be our fate, let it happen on Namibian soil and not over the sea or an unknown territory! Human nature is sometimes funny. When I enter a plane I often think what if something happens' and I look around to see who is in the plane with me. I had the same thoughts in 1989, although I didn't share them with anyone, but when the plane reached its cruising altitude I realized that the die was cast - we were going home! The other passengers were also engrossed in their own thoughts. Perhaps they too were thinking about the same things that I was: Are we really going home? Are we going to land safely or will we be shot down?' I was apprehensive but not scared; I just thought that it was better to die on the soil of the motherland if we were shot down. I also felt that the world was watching and the South Africans wouldn't be that stupid to shoot down the plane carrying us. When the pilot announced that we were entering Namibian airspace, the mood changed, and the passengers became more alert. I think there were no drinks on the plane otherwise we would have toasted this momentous occasion. We started chatting and looking out of the windows. I began to observe how dry our country was. Coming from the lush, green, Angolan landscape, I felt disappointed. We touched down at Windhoek Airport on a very cold, dry, afternoon; the airport was full with a huge crowd who had come to welcome us; no doubt they were curious about what we looked like. Our SWAPO colleagues Comrades Anton Lubowski, Daniel Tjongarero, Niko Bessinger and many others, who had stayed inside the country had organized everything, particularly accommodation and transport on our arrival. (...)

This is an excerpt from the memoires: Making a Difference, by Libertina Inaaviposa Amathila.

Making a Difference is the life story of Libertina Inaaviposa Amathila former minister in Namibia.

The Empty Armchair is a sequel to Dr. Libertina Inaaviposa Amathila’s autobiography Making a Difference.

On Solid Ground is a report on Gabrielle Lubowski’s life irrevocably changed when her husband ans SWAPO activist Anton Lubowski’s, was gunned down outside his home in Namibia in 1989.

The History of Nursing in Namibia

Agnes van Dyk has diligently researched the history of nursing in Namibia from 1800 to 1996, and come up with a book which most faily reflects the true events

Neither Here nor There: Indigeneity, Marginalisation and Land Rights in Post-Independence Namibia

Neither Here nor There: Indigeneity, Marginalisation and Land Rights in Post-Independence Namibia.