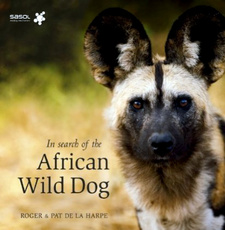 The African wild dog, Lycaon pictus, here described by Roger de la Harpe and Pat de la Harpe, can trace its ancestry back millions of years. It is one of the Canidae family, the members of which include wolves, coyotes, foxes and dingoes and occur in a variety of habitats across the world.

Of the five species in southern Africa - the wild dog, black-backed jackal, side-striped jackal, Cape Fox and bat-eared fox - the African wild dog is the largest and is purely meat eating. While there is a general similarity between the various canids worldwide, the African wild dog differs from the others in a fundamental way: it belongs to the genus Lycaon which formed a new branch on the family tree some three million years back and subsequently evolved completely independently. Today it is the only survivor of this unique line and, because of its genetic difference, is unable to interbreed with any of its canid relatives or even with the domestic dog. The species was originally named Hyaena picta by Temminck (first director of the National Natural History Museum in Leiden, Holland), in 1820, from a specimen from coastal Mozambique. The derivation of the wild dog's scientific name, Lycaon pictus, is as intriguing as the animal itself. The word 'lycaon' comes from an ancient Greek myth, in which the first King of Arcadia offered Zeus (king of the Gods) a plate of human flesh, to test his omnipotence. Zeus pushed the plate away in disgust and duly turned the king and his 50 impious sons into wolves. This myth is intertwined with another that tells of an ancient cannibalistic sect in pre-Hellenistic Greece, from which the legend of the werewolf (lycanthropy) originates. Pictus means painted in Latin and refers to the painted effect of the animal's coat - together these words, lycaon and pictus, make up the evocative scientific name of the African painted wolf. To further add to their mystique they are known locally as the Cape hunting dog, wildehond (Afrikaans), !//haru (Bushman), makanyane (Sotho/Tswana), matlhalerwa (Tswana), amanken-tshane (Zulu) and mahlolwa (Shangaan), to mention a few. All these names describe the same animal - a sleek and slender predator, weighing up to 26-28 kg when fully grown, with long thin legs, a large head, rounded black ears, a white-tipped tail and a marbled coat in various combinations of black, white and tan. Each dog has its own distinctive colour pattern: its designer pelt provides excellent camouflage on the grassy plains, in the open woodlands and bushy savannas it frequents. Their unique markings have proved invaluable to researchers as a way of identifying individuals in study groups. Interestingly enough, the wild dogs of southern Africa are generally larger and lighter in colour than their cousins further north (average 18 kg). This is believed to be connnected to the fact that the principal prey in east Africa is the smaller Thomson's gazelle (20-27kg), while in southern Africa it is the impala (45-65kg). Perhaps the most successful hunter in Africa, it is ironically also one of the most endangered. In the past African wild dogs were found in diverse habitats across the continent, with the exception of densely forested and extremely arid areas. There is a report in the East African Wildlife Journal dated 1970 that a climber - none other than the famous explorer Wilfred Thesiger - encountered several wild dogs on the slopes of Kilimanjaro, at 5894 metres above sea level. [...]

This is an excerpt from the book: In Search of the African Wild Dog, by Roger de la Harpe and Pat de la Harpe.

Mammals of Botswana and surrounding areas

This is a easy-to-use guidebook to mammals of Botswana and surrounding areas including information on anatomy, physiology, skulls, spoors and droppings.

Mammals of the Kruger National Park and surrounding Bushveld

This is a easy-to-use guidebook to mammals of Kruger National Park and surrounding Bushveld including information on skulls, spoors and droppings.