Identification of indigenous cycads of South Africa, by Cornia Hugo 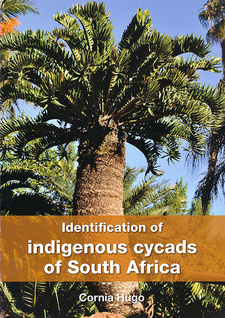 Cornia Hugo's guide to identification of indigenous cycads of South Africa is not a scientific, taxonomic publication, but was developed for practical use in the veld.

[...] Clear photographs of each species, an identification key and the outstanding features of each species is included. With all the different variations that occur within the indigenous South African cycad species, it is almost impossible to cover all the variations with a single key. The 37 Encephalartos species are divided into six groups according to the leaflet shape, colour, width, margin and flexibility. Bear in mind that there are many hybrids in gardens, which will make identification even more challenging. If a cycad is not planted in its natural growing habitat as illustrated on page 8, the appearance of its leaves will change, e.g. the leaves of E. transvenosus planted in shade will grow longer. In identifying a cycad in your garden it is important to know which group the plant belongs to. For this reason it is important to allocate the leaflets to one of the six leaflet categories as illustrated and summarised on page 22 to page 25, After the leaflet has been categorised in a group, the key can then be used to identify the plant. The illegal collection of cycads from natural populations for the garden trade is the predominant threat to South Africa's cycad populations. Five of South Africa's cycad species are already extinct in the wild, almost 65% are likely to become extinct in the wild due to the collection of plants from the wild. Habitat destruction and traditional medicinal use are also important threats to cycad populations in South Africa. The following cycad species are extinct, E. brevifoliolatus, E. woodii, £ hirsutus, E. inopinus and E. cerinus. A further 27%, currently considered safe, will become threatened with extinction. With more than half of the known African cycad species, South Africa is considered a critical centre of cycad diversity. Of the 37 cycad species occurring in South Africa, 29 (76%) are endemic to the country, i.e. they occur nowhere else in the world. The world's three cycad families (Cycadaceae, Stangeriaceae and Zamiaceae) are considered to be amongst the most threatened plant families in the world. The Convention on International Trade in Endangered Species of Wild Fauna and Flora (CITES) came into effect in 1973 and the genera Encephalartos (this includes all except one of South Africa's cycad species), Microcycas and Stangeria were listed in CITES Appendix I (for species in immediate danger of extinction) in July 1975, followed in February 1977 by the listing of the entire families of Cycadaceae and Zamiaceae in Appendix II. Under CITES regulations, an Appendix I listing prohibits trade in wild-collected plants except for scientific or conservation purposes. [...]

This is an excerpt from the guide: Identification of indigenous cycads of South Africa, by Cornia Hugo.

This guide is a practical easy-to-use guide for the identification of indigenous cycad species of the genus Encephalartos of South Africa.

Using cones to identify the indigenous Cycads of South Africa

This is a practical easy-to-use guide, by using cones for the identification of indigenous cycad species (Encephalartos species) of South Africa.