istory and Traditions of the Kwanyama, by Edwin Meyer Loeb 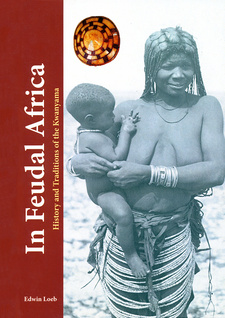 This edition of In Feudal Africa. History and Traditions of the Kwanyama is a reprint of Edwin Loeb's overview of the history, social order and culture of the Kwanyama people, the largest Owambo tribe, prior to the influences of European culture.

Edwin Meyer Loeb, descended from German immigrants, was born in New York City in 1894. The time after the conclusion of his studies with a Ph.D. from Yale University in 1922 until his death on 16 August 1966 is characterized by restless academic activity, both in the fields of lecturing and of research. Though employed as a lecturer in Anthropology at the Berkeley University (California), he spent several years on research expeditions to various Indian tribes in California and New Mexico. He also studied the peoples of New Zealand and on several Indonesian and Polynesian islands, and it was during this period that his best-known work appeared, Sumatra: Its History and People, which was published in Vienna in 1935. The wide-ranging experience he had gained and his thorough knowledge of his field made him a respected guest speaker at numerous institutions both in the United States and abroad, and at congresses on a wide range of subjects, while his achievements were honored by scientific circles on a number of occasions. Loeb came to Namibia in 1947 as a member of the "University of California Africa Expedition" to study the Kwanyama in northern Namibia, and remained in the country for about one year. This expedition inter alia produced a 16-mm "movie film" on the Kwanyama which Loeb showed during a series of lectures at various American universities and in Germany and Austria. At the same time, he arranged exhibitions of photographs taken and ethnological items collected during the expedition. Also, he wrote articles on the ethnographic position of the Kwanyama (he uses the term Kuanyama Ambo) among the peoples of Namibia, their folklore, magic, and initiation rites. In 1962 he published this book, entitled In Feudal Africa. The Kwanyama are the largest Owambo tribe and comprise two autonomous sections. About half the members of the tribe live in the extreme north of Namibia and the others in southern Angola; prior to the arbitrary demarcation of the border between the two former European colonies in 1886, however, both sections were headed by one king who had his chief seat at Ngiva (Ondjiva) in southern Angola. The most important section of this book provides an overview of the history, original social order and culture of the Kwanyama people prior to the incisive influences of European culture. Loeb attempts to trace the route of their migration and the sources of the individual cultural elements in accordance with the cultural area concept. This method, combined with a comparative analysis within a regional context, enables the scholar to reconstruct historical events for which there are no accurate data and oral traditions. Such an endeavor, however, requires extensive knowledge of related Bantu tribes, which the author's relatively short preoccupation with southern Africa could not always provide, as illustrated, for example, by the inaccurate remark pertaining to the Kavango tribes. Kwanyama social life is based on a matrilineal organization with exogamous clans in which women have an elevated status. The sons of a man's eldest sister are the legal successors and heirs. The bride price is quite low and, as a result, marriage relationships are rather unstable. Besides the gathering of veld food, ancient hoe cultivation was the most important subsistence activity, and prevails even today. The chief crops are millet, sorghum and maize, supplemented by sugar cane, groundnuts, beans, pumpkins, melons and sweet potatoes. Both men and women work in the fields. These original customs and laws were marginally overlaid by a patrilineal stock-farming component, for which Loeb uses the rather unfortunate term "Mediterranean culture". In all probability, the so-called "cattle complex" with its specific rites and taboos originated in north-eastern Africa. [...]

This is an excerpt from In Feudal Africa. History and Traditions of the Kwanyama, by Edwin Meyer Loeb.

In Feudal Africa: History and Traditions of the Kwanyama