Guide to the Aloes of South Africa, by Ben-Erik van Wyk and Gideon Smith 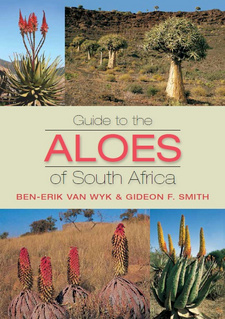 Aloes are gaining in popularity in these areas and it was considered prudent to give the reader some guidance as to the use of these plants in domestic and amenity horticulture. Finally, Ben-Erik van Wyk and Gideon Smith hope you, the reader, will derive as much pleasure from reading this Guide to the Aloes of South Africa as they did from writing it.

Aloes form a conspicuous part of the South African landscape and their striking beauty is appreciated by many. This book is a user-friendly field guide to all South African aloes. Short descriptions and clear photographs of all 125 species occurring within the boundaries of South Africa have been included, showing the plants in habitat and also most of their distinguishing characteristics. In this regard it is aimed at as wide an audience as possible. Botanists, field naturalists, students of our enormous succulent flora and gardeners with little more than a passing interest should now find aloe identification a far simpler task. Distribution maps of all the species are provided. This information is often very helpful as an aid to identification, but descriptions and photographs should also be consulted. Only the South African (but including Swaziland and Lesotho) distribution ranges are given for those species that occur further afield in neighbouring countries. To keep disruptive name changes to a minimum, we have mostly followed the classical species concepts of the well-known aloe authority, Dr G.W. Reynolds, first published in 1950. Due to new developments in the classification of aloes, especially the revision of all South African aloes by Glen and Hardy published in 2000 (see Further Reading), some changes were unavoidable. It is important to note that there are no absolute criteria for deciding on what rank to apply to a particular aloe and how different it should be from others to justify the rank of species. There are many examples of regional forms that have been described as species. If these are reasonably recognisable as distinct entities, we have retained the existing names. For practical reasons, the ten groups into which the aloes are placed in this book are based mainly on size, growth habit and branching pattern. Closely related species that differ in their growth habit may therefore have been placed in different parts of the book. A more natural grouping would have been possible (and would indeed have been more satisfying to botanists), but our main intention was to help even the most inexperienced aloe lover find the correct name. The groups are given more or less in a descending sequence based on the size of mature plants; from tree aloes (Group 1) to grass aloes (Group 10). Once experience is gained in recognising the groups, selecting the correct species from within the group will be comparatively easy. The presentations of species and distribution maps can hardly be regarded as complete because there is still so much to learn about aloes. However, we do believe that this book fills a void that has existed for a number of years and that aloe identification will now be considerably easier.

This is an excerpt from the Guide to the Aloes of South Africa, by Ben-Erik van Wyk and Gideon Smith.