Flame in the Snow: The Love Letters of Andre P. Brink and Ingrid Jonker, by André Brink 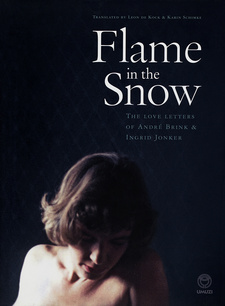 Flame in the Snow: The Love Letters of Andre P. Brink and Ingrid Jonker, have been offered to be published only weeks before the writer's death on 6th February 2015.

In one of her earliest letters to Andre Brink, Ingrid Jonker concludes with the following statement:

I still want to tell you so, so much more, when we are alone and without damning blue words on paper between us - they look so banal, so crass, so unaccounted for.

On the following day (that is, before he receives this communication), Brink expresses a similar frustration with words in letters:

But letters and words are becoming more fraudulent by the day. I can't remember ever experiencing the insufficiency of words as agonisingly as in the past while.

If the letters presented in this volume were as unreliable and painfully deceptive for their authors as these quotations suggest, then how much more fraudulent and painful might they not appear to us, decades later? For contemporary readers, the likelihood that the words in these letters will appear banal and crass is far greater than for the writers themselves. At the time, Jonker wrote that genuine communication without actual physical presence was impossible: "Everything enlarged and out of context, because there are only words, without facial expression or the touch of a hand."

WITHOUT FACIAL EXPRESSION OR THE TOUCH OF A HAND

Reading the letters today, with merely the words on paper before us, it is even more difficult to grasp the context, for two reasons in particular: firstly, we do not have access to their telephone conversations, or to the tape recordings they sent each other, containing information about the times they spent together and the situations in which they sat down to write their respective letters. All we have are scraps - scattered references to such details. And secondly, we read these letters today in the knowledge of how the rest of their lives played out. Readers are likely to be familiar with certain details of Jonker's life, which came to an end surrounded by seawater and kelp. At the time, Brink was still in the early stages of his career as a writer. When the two met for the first time, Brink's important early novel, Lobola vir die Lewe [Dowry for Life], had just appeared, and Jonker had published a single volume of poetry called Ontvlugting [Escape]. Today we think of Brink as a celebrated, prize-winning author with twenty-four novels to his name, and as a highly regarded academic. We view Jonker as an iconic poet whose reputation has grown to almost mythical proportions. In 1994, her poem "The Child Who Was Shot Dead by Soldiers in Nyanga" was recited by Nelson Mandela during his oration at the opening of South Africa's first democratic parliament. Brink published a comprehensive autobiography, A Fork in the Road (2009), in which he devoted an entire chapter to his relationship with Jonker. Petrovna Metelerkamp's biography, A Poet's Life (2003), was enthusiastically received. There has also been Louise Viljoen's pocket biography of Jonker (2012). Despite the authors' dissatisfaction with the inadequacy of words on paper, their correspondence was in fact a major part of the relationship, a love affair that lasted just under two years. The physical distance between Grahamstown, where Brink was a lecturer at Rhodes University, and Cape Town, where Jonker worked as a proofreader, meant they had very limited time to actually be together, to supplement a relationship that consisted of mere words. For the most part, the lovers had to rely on correspondence to conduct their relationship. [...]

This is an excerpt from the book 'Flame in the Snow: The Love Letters of Andre P. Brink and Ingrid Jonker', by André Brink.

Flame in the Snow: The Love Letters of Andre P. Brink and Ingrid Jonker

Flame in the Snow unfolds one of South African literature’s most famous love affairs, the one between Andre P. Brink and Ingrid Jonker.