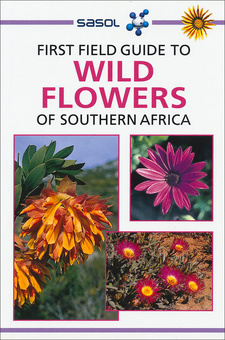 John Manning, author of First Field Guide to Wild Flowers of Southern Africa, is a world authority on the Iris and Hyacinth families. His diverse research interests include the evolution and pollination biology of South African plants.

Southern Africa is a wild flower paradise. The region is home to many different kinds of plants, from small succulents, which survive in the harsh deserts of southern Namibia and Namaqualand, to enormous forest trees, which thrive in the moist areas along the eastern coast. The region is home to more than 18,500 different species of flowering plants. As a result of this great diversity, southern Africa has more plant species than any other similar-sized area outside of the tropical forests of South America and Asia. There are several reasons for the region's wonderful floral wealth. One of these is a varied landscape that provides many different growing conditions for plants. In its geography, southern Africa resembles a soup plate turned upside down. Moving inland from a hot and humid coastal strip in the east, the land soon rises to a well-watered mountainous belt, which reaches altitudes of 3,500m in the KwaZulu-Natal Drakensberg. This mountain belt forms the border to a high, flat, grassy plain or plateau located in the middle of the country. The climate becomes drier towards the west and the central grassy plateau gives way to the Great Karoo and Kalahari deserts. The west coast is the most arid part of the region and it is along this coast that the Namib Desert is found in Namibia. A second reason why southern Africa is so rich in wild flowers is that it experiences two entirely different climates. Over most of the region, the rains fall in the warm summer months and the winter months are dry and cold. Most plants in these summer-rainfall areas flower in the spring and summer. However, in the Western Cape and Namaqualand, the rains fall mainly during the cooler winter months and the summer is hot and very dry. In this Mediterranean climate or winter-rainfall region, many plants flower in late winter and early spring.

Description: The plants are stemless with a tuft of leaves at ground level. The leaves are spear-or arrow-shaped, sometimes spotted with white, and are carried on long, spongy stalks. What appears to be the flower is really a collection of tightly clustered flowers arranged in a narrow spike.This is surrounded by a large funnel-shaped sheath which curls around the spike at its base; the sheath is flared outwards at the top and is most often white but may be yellow or pink.

Notes: The roots of arums are filled with minute, needle-like Zantedeschia aethiopica crystals which, if eaten, cause the mouth and tongue to swell up painfully, but these defences are useless against porcupines which are very fond of the roots. The White Arum is widespread in southern Africa and is very popular as a cut-flower; the yellow-flowered species are much rarer.

This is an excerpt from First Field Guide to Wild Flowers of Southern Africa, by John Manning.