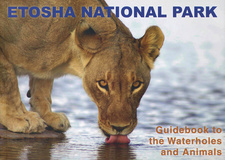 This is a collage of images from Etosha National Park. Guidebook to the Waterholes and Animals, by Amy Schoeman.

Etosha National Park is internationally famous for its wildlife and landscapes. Amy Schoeman edited this Guidebook to its waterholes and animals.

The types of waterholes in Etosha National Park

After the rains, any surface water present in the small lakes, depressions and pans quickly dries up. As a result the only source of water available to the birds and mammals is the waterholes, of which five different kinds are found in the park. The first are natural, shallow depressions, known as pans, and road-borrow pits that collect water during the rains. Both are seasonal in nature and have usually become dry by June. These ephemeral waterholes are numerous in the park and will not be detailed in this guide. The second type of waterhole is the contact spring caused by water seeping out of layers of rock at break points. These springs are, however, heavily dependent on rainfall, and tend to dry up when rains are poor. The springs along the edge of the pan at Kapupuhedi, Ondongab and Wolfsnes are good examples of this type of waterhole, all of them having dried up during the 1980s following the persistent drought of 1980-1983. The third type is the water-table spring where depressions are deep enough to come in contact with the water table. As the water table can vary from year to year, the level of these springs varies accordingly. Some of these springs, such as Ombika, have been dug deeper by animals and humans. The fourth type of waterhole is the artesian spring where pressure within the underlying rock forces water to the surface. The best examples of these are Koinagas and Klein Namutoni. The fifth type is the artificial waterhole created and maintained by park management by sinking boreholes at specific places. The location of these waterholes was based mainly on favourable hydrological conditions. However, a secondary reason proposed by researchers was to help distribute the game to under-utilised areas. When these boreholes were first installed, windmills were used to pump the water, but these have all been replaced with either diesel or solar pumps, such as at Gemsbokvlakte and Olifantsbad. At some of the natural springs, including Aus and Ombika, solar pumps have been installed to supplement the natural flow of water and thus prevent the waterholes from drying up during years of low rainfall. Over time, the combined pressure of humans and wildlife have influenced the water level and vegetation around these waterholes. […]

This is an excerpt from the guidebook: Etosha National Park. Guidebook to the Waterholes and Animals, by Amy Schoeman et al.